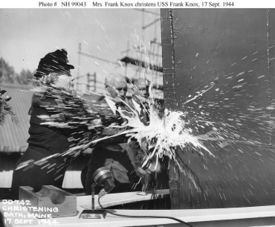 Ship ceremonies are held to mark historical occasions in the life of a ship. The ceremonies vary from country to country and from ship to ship. Warships are often honored differently than merchant ships, and larger ships are more subject to formal ceremonies than are smaller ones. Many of the ceremonies have roots that can be traced to antiquity.

U.S. Navy tradition dictates that each ship constructed for the service be honored on four historic ceremonial occasions: keel-laying, christening (or launching), commissioning, and decommissioning. Official directives pertaining to these events are issued periodically by the Chief of Naval Operations and subordinate commanders.

Typically, all these ceremonies begin with the playing of the national anthem, an invocation by a chaplain, and a speech in honor of the event. The formal execution of the purpose of the ceremony follows these, and the event is closed with a benediction, retirement of the colors and possibly music from a Navy band.

The first milestone in the history of a ship is the generally simple ceremony that marks the laying of the keel. The invitation is issued by shipyard officials and the ceremony conducted by them. The builder may be the commander of a naval shipyard or the president of a private company.

The key parts of the ceremony are the optional authentication of the keel-laying by the placement of a plaque or the inscription of the authenticator's initials on the keel, followed by the workmen's moving the keel into position on the shipway, and the announcement that "the keel has been truly and fairly laid."

In the case of large and important warships, high officials of the Navy may attend and take part in the ceremony. For smaller ships, there may hardly be a ceremony at all. The nature of the ceremony also depends on the construction of the ship. Wooden ships are relatively small, and the keel is often one large piece of wood, sometimes placed by the men who made it. In older steel ships, the keel was often made from riveted pieces of metal, and the riveting of the first piece might correspond to the laying of the keel. World War II saw the introduction of welded ships, so a contemporary keel might be a massive welded assembly that is lowered into place by a giant crane. 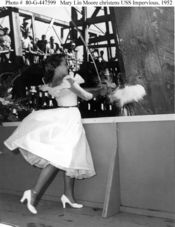 In this second significant ceremony, the recently constructed ship is solemnly dedicated, named and committed to the sea. There are many variations in the launching programs, even as to whether it is known as a launching or christening or both. The desires of the shipbuilder and of the Navy as well as existing circumstances will determine its final form. The designation of U.S. Ship (USS) is not properly used with the ship's name at this point, since she has not yet been accepted into naval service.

The speaker at this ceremony often pays tribute to the ship's namesake and recounts the history of other ships having the same name. It is not uncommon for the ceremony to be covered in the local or national press.

For this ceremony the ship has a sponsor, generally a prominent woman who, during the ceremony, names the vessel and breaks a bottle of wine or champagne against the ship's bow as the vessel slides into the water. Depending on the size and importance of the ship, its sponsor can be a community leader, a relative of the ship's namesake, a relative of an executive of the shipyard, or even a prominent national leader. Often the sponsor receives a ceremonial gift from the employees of the shipyard. 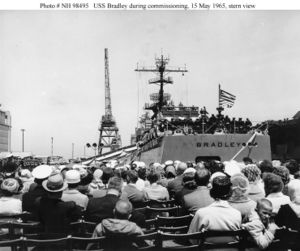 The third and most important ceremony in a ship's history admits her to the U.S. Navy. The essence of the ceremony is her acceptance by the Navy, entitling her thereafter to fly the commission pennant and to be designated a U.S. Ship. Families of the ship's officers and crew are usually invited to the ceremony, so it tends to be a large and festive event. Officials of the Navy, the shipyard, and the local community generally attend as well.

There are two major steps in the commissioning process. Initially, the builder turns the ship over to the senior Navy official. The latter, who is the intermediary between builder and prospective commanding officer, receives the ship and commissions her. The Navy official then turns the ship over to the prospective commanding officer who accepts her, assumes command, and proceeds to act as host for the remainder of the ceremony.

During the ceremony, the crew of the ship being commissioned assembles and stands in formation, headed by their division officers and department heads. Other ship’s officers assemble facing the ceremony, usually behind the executive officer. Distinguished guests and participants in the ceremony are seated. The first watch and the officer of the deck (OOD) take their stations on the quarterdeck. Crew members station themselves at the ready, standing by the national ensign, union jack, and commission pennant or personal flag halyards. The officer making the transfer (usually an officer of flag rank) opens the ceremony by reading the orders for delivery of the ship to the U.S. Navy. “Attention” is sounded by the bugle, the national anthem is played, and all flags, including the personal flag of the officer making the transfer, are hoisted simultaneously. With this act the ship is officially commissioned.

The officer effecting the transfer delivers the ship to the new commanding officer by saying, “I hereby deliver the USS (name of ship)." The new commanding officer reads his orders and states, "I hereby assume command of the USS (name of ship)," and orders the executive officer to "set the watch," or sometimes "set the watch and bring the ship to life." The executive officer, in turn, directs the OOD to set the watch, and the ship’s boatswain (or chief boatswain’s mate in small ships) pipes the watch. The OOD and the other members of the watch take their assigned watch stations.

Still another ceremony terminates the active naval service of ships other than those lost at sea. A decommissioning is generally a somber occasion and far less elaborate than any of the others discussed here.

The ship's commanding officer is the featured speaker. After giving a brief history of the ship, he reads his orders and the ships colors are taken down. If the ship is being transferred to the reserve fleet, a representative of that organization will accept the custody of the ship.

After decommissioning, many U.S. Navy ships are transferred to a reserve fleet, where they remain the property of the Navy and are subject to future recommissioning. When the ship is no longer needed, it is "stricken from the Navy register", at which time it no longer belongs to the Navy. Stricken ships can be sold to other countries, scrapped, sunk as fishing and diving reefs, or even kept on hand in case of future need.