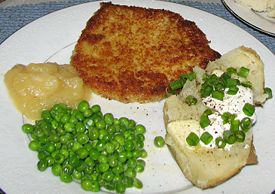 A schnitzel is a thin slice of meat. The word is of German origin and in German-speaking countries "schnitzel" is also used to describe dishes prepared with such a slice. If no other preparation is mentioned, then a schnitzel is a breaded or Wiener schnitzel, a schnitzel fried with a coating of egg and breadcrumbs, called in French an escalope.

While the Wiener schnitzel of the international cuisine knows many variants—both of the meat used and the garnish accompanying it—its prototype, the Austrian speciality Wiener Schnitzel, has to be made with veal and should be accompanied by potatoes and a lemon wedge.

A schnitzel is usually prepared from a thin cutlet of veal, although chicken, pork, or turkey cutlets can be used instead. Always cooked in butter or oil, the breaded cutlet is generally sautéed but occasionally is deep-fried in oil or fat. Many variations of the schnitzel developed as this well-known recipe spread throughout Europe.

The breaded schnitzel is a dish from Austria although variations of this dish are eaten throughout Europe including Germany, France, and Italy. Two frequently repeated legends claim to describe its origin:

Neither story has been confirmed by historians.

(CC) Photo: Hayford Peirce
A homemade schnitzel with its breading, waiting to be refrigerated, then cooked

Schnitzels may also be prepared without the breading, when they are known as au naturel or au nature.[4][5] In this case, they are sometimes dusted with seasoned or plain flour before being cooked.

Variations in preparing schnitzels include cheese schnitzel where the veal cutlet is prepared as for Wiener schnitzel but is dipped in a half-and-half mixture of Parmesan cheese and bread crumbs. This dish is served with a lemon slice for garnish.

Almond schnitzels are veal dipped in sour cream and then almonds before cooking.[6][7][8]

In Austria, breading is a very common and frequently applied technique that is not only used with veal (for a Wiener Schnitzel), but with a large variety of meat and even non-meat ingredients. Such dishes are called -schnitzel or -schnitzel nach Wiener Art (Viennese style) or described as gebacken.

When veal is replaced with the cheaper pork the result is a Schweinsschnitzel, the most common schnitzel. A Putenschnitzel is made with turkey.[9] Another notable Austrian speciality is the (Wiener) Backhuhn or Backhendl (chicken).

The Cordon bleu is a breaded schnitzel filled with ham and cheese.

Veal cordon bleu, veal parmigiana, and many veal scallop dishes, including, for instance, escalope de veau Orloff, all use similar cooking techniques as schnitzel. Veal cordon bleu has veal cutlets stuffed with prosciutto or smoked ham with Swiss cheese. The filling is sandwiched between veal cutlets, breaded and cooked in butter. Veal parmigiana is prepared by breading the cutlets in Parmesan cheese and bread crumbs then sautéing the cutlets in clarified butter. The cutlets are then served with a tomato sauce. Scallops of veal Orloff is a veal cutlet sautéed in clarified butter then covered with a soubise, a thick mixture of cooked rice, onions, and mushrooms. Yet another recipe using veal or pork schnitzel is Jägerschnitzel, where Jäger means hunter. The cutlet, which may or may not be breaded, is topped with a burgundy-mushroom sauce.