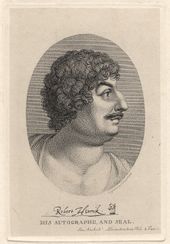 Robert Herrick, from the frontispiece to Hesperides

Robert Herrick (1591-1674) was one of the finest English lyrical poets[1] and a royalist clergyman, incumbent of Dean Prior in Devon.

It is known that Herrick was the seventh child of a London Goldsmith, Nicholas Herrick, that he was educated sufficiently to attend St John's College, Cambridge, and that before he had published anything he was known as one of the "Sons of Ben" (or Tribe of Ben), a group of poets around Ben Jonson and adhering to his conception of lyrical poetry. Having served as an army chaplain in the Duke of Buckingham's vain attempt to support the Protestants of La Rochelle, he was appointed in 1630 as vicar of Dean Prior in Devon. Here he seems to have been simultaneously repelled by the rustics and appreciative of the rhythms of rural life. Seventeen years later Parliament evicted him from his living, and he returned to London. His unrepentant royalism was demonstrated by his dedicating his collection of lyrics, Hesperides (1648), to the Prince of Wales, soon to become Charles II on the execution of his father. At the Restoration he was restored to Dean Prior, where he died in 1674. He was buried in an unmarked grave, though there is a memorial tablet of 1857 in the church.

Herrick appears to have been of a sociable and congenial character, easily making and keeping friends, and keeping in touch with extended family. It is likely that during the period he was evicted from his living, he was supported by patrons, friends and family.

Unlike John Donne, Herrick did not totally repudiate the "profane" verse published in Hesperides, though in the same year he published his Noble Numbers, expressing aspects of his Christian belief, in which he expressed a conventional regret for his other poems. After these two collections his known output amounts to only a few poems.

When he would have his poems read

Herrick's work continued to be known, but his reputation really began to flourish in the later 19th century, when an edition of his work was produced by Swinburne, who praised him mainly as the greatest English song-writer, saying "his more ambitious or pretentious lyrics are merely magnified and prolonged and elaborated songs".[2] Since then, though attacked by some, his reputation has never seriously been in doubt, with his poems being anthologised, and several editions of all or some of his work being produced. His lyrics show great care in rhythm and assonance.

Herrick is one of the main characters in Rose Macaulay's historical novel They Were Defeated.