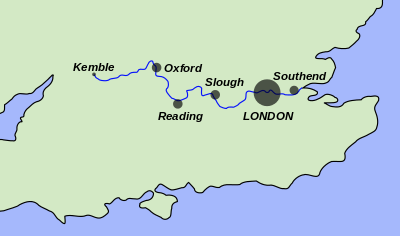 The Thames River (alternately River Thames) is a river with its headwaters near England's border with Wales, that flows approximately 100 miles east, to empty into the North Sea.

When the Roman Empire conquered Britain, they built their Provincial Capital, Londinium, at the lowest place the river could be crossed - subsequently renamed London.

During the age of sailing ships London was a very busy port.