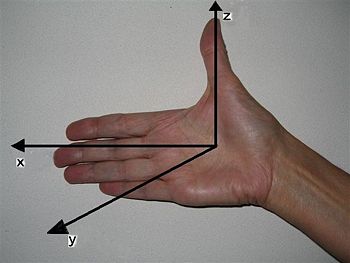 CC Photo
Right-hand rule. Move open palm of right hand from x  to y, then thumb is direction of z.

The right-hand rule relates a rotation to a vector perpendicular to the plane of rotation.

The right-hand rule appears in the cross product,

The direction of the unit vector ez given as the cross product of unit vectors along the x- and y-axis is given by the right-hand rule, see photograph.[1]

The case depicted here employs the x- , y- , and z-axis, which normally are orthogonal to each other. However, the rule works for any two straight lines in the xy-plane at some angle α, as long as 0° < α ≤ 180°. If the vector e1 points along one line and it can be rotated in the sense of the fingers of the right hand to align with a vector e2 along the other line, then the direction of the cross-product e1×e2 always is in the z-direction perpendicular to the xy-plane and in the direction of the thumb. 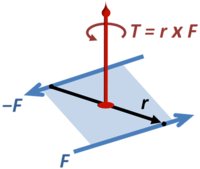