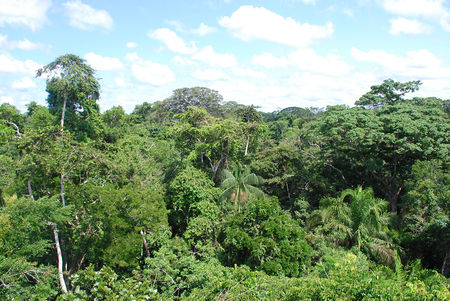 A rainforest is an area of trees and vegetation which receives high rainfall, and which is so dense that little light reaches the nutrient-rich ground. Rainforests are the richest regions of the world in terms of diversity of life, and are found in the tropics or temperate climes, in moist, lowland areas.

Tropical rainforests receive daily rainfall, with more in the monsoon season, and have high humidity with little variation in temperature. For example, in Manaus, Brazil, rainfall in the Amazon rainforest is between 50mm and over 300mm across the year, while temperature varies by only 2°C.[1] The day's rainfall repeatedly evaporates to form the clouds that drench the area (the water cycle).

Not all tropical forests are rainforests, however; dry tropical forests are so called because they are found in areas with a dry season, and typically incorporate deciduous (leaf-shedding) trees that allow sunlight to penetrate to the forest floor.[2] Rainforest trees, on the other hand, are mostly evergreen.

Rainforests are a valuable source of commercially-logged wood, and some areas are endangered as a result.[3]