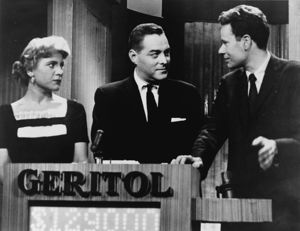 The TV show "Quiz Show" was the focus of a huge scandal when Charles Van Doren, a contestant, confessed that he had been given the right answers beforehand by the show's producers in a scheme to attract more viewers.

A quiz show is a broadcast program on television in which people answer questions for prizes. Contestants can be members of the public as well as celebrities, and can compete as teams or individually. The game's rules are usually simple and understood beforehand, almost always with time limits. The entire show is built to create interest and excitement, and usually features gimmicks such as flashing lights, ringing bells, humor and costumes, with a fast pace. The host of the show is usually a celebrity or, if the show is highly rated, becomes a celebrity quickly, and there are numerous opportunities for the show's sponsor to tout their wares, sometimes by offering them as prizes, or using them in questions, and so forth. One popular quiz show in the US called "Jeopardy!" features three contestants competing against each other to answer trivia questions, and they must pose their answers in the form of a question such as "What is the...".

Many television game shows were ported from similarly-themed shows on radio. A hit quiz or game show can be highly lucrative for a network, since the shows can be shot indoors on an easy-to-control budget; some successful TV game shows have been running for decades with little variation in their format. Quiz shows have been marked from time to time by rather well-publicized scandals; producers of the TV show Quiz Show, for example, were found to have been feeding the correct answers to one of the contestants who was thought to have drawn higher ratings; but when the truth was exposed, a huge uproar resulted, including testimony by the show's executives before members of Congress.[1]

The genre has evolved, with bursts of creativity from many sources. According to one account, the earliest quiz shows grew out of "on-the-street" radio interviews on a show called Vox Pop, a Houston-based radio program in 1932.[2] Money was added to the mix; a CBS radio program in 1936 called Professor Quiz featured interviews with guests tried to stump Dr. Craig Earl with questions; "those who were able to stump him walked away with a cool $25."[2] Generally quiz show questions were easy, although additions of the Information, Please almanac in 1938 added new dimensions to the possibilities for questions.[2] Later, Groucho Marx in the TV quiz show You Bet Your Life tweaked the formula again by adding a celebrity host, humor, and this show lasted 14 years and ended in 1961.[2]

Why are quiz shows successful? A reporter for National Public Radio mused: