Polonium is a chemical element, having the chemical symbol Po. and atomic number 84. A rare radioactive metalloid, polonium is chemically similar to tellurium and bismuth and occurs in uranium ores. Polonium has been studied for possible use in heating spacecraft.

Polonium has no stable isotopes and has over 50 potential isotopes. It is extremely toxic and highly radioactive. Polonium has been found in tobacco smoke from tobacco leaves grown at some specific places, as a contaminant [1][2] and in uranium ores. All elements from polonium onward are radioactive. The great radioactivity of polonium and its immediate neighbors to the right on the periodic table, and its stark contrast with lead and bismuth, is due to the great instability of nuclei containing 84 or more protons. Nuclei that contain 128 neutrons along with 84 or more protons are especially unstable. Curiously, thorium-232 and uranium-238 are in an "island of stability" which renders them stable enough to be found in large quantities in nature, but heavier nuclei are more and more affected by spontaneous fission. Even in milligram or microgram amounts, handling 210Po is difficult and requires special equipment because of the ability of Po to enter the vapour state. Internal exposure can expose tissues from alpha particles. This radioactive element dissolves readily in dilute acids, but is only slightly soluble in alkalis. It is closely related chemically to bismuth and tellurium. Polonium (in common with 238Pu) has the ability to become airborne with ease. More than one hypothesis exists for how polonium does this; one suggestion that that small clusters of polonium atoms are spalled off by the alpha decay.

The maximum allowable body burden for ingested polonium is only 1100 becquerels (0.03 microcurie), which is equivalent to a particle weighing only 6.8 × 10−12 gram. Weight for weight polonium is approximately 2.5 × 1011 times as toxic as hydrocyanic acid. The maximum permissible concentration for airborne soluble polonium compounds is about 7,500 Bq/m³ (2 × 10−11 µCi/cm³). 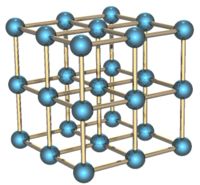 The alpha form of the Po solid is cubic (Po-Po distance is 3.352 Å), it is a simple cubic solid which is not interpenetrated. A myth has grown up from a single sentence in one of the original papers on the crystal structure as determined by X-ray powder diffraction that describes Polonium's structure as an interpenetrated cubic solid. While this is not the structure, a reasonable number of real examples of such an interlocking network have been found.

The beta form of polonium is hexagonal; it has been reported along with the alpha form several times in chemical literature.

The first report of the crystal structure of Po was done using electron diffraction.[4]

When it is mixed or alloyed with beryllium, polonium can be a neutron source. Other uses;

This isotope of polonium is an alpha emitter that has a half-life of 138.39 days. A milligram of polonium-210 emits as many alpha particles as 5 grams of radium. A great deal of energy is released by its decay with a half a gram quickly reaching a temperature above 750 K. A few curies (gigabecquerels) of polonium-210 emit a blue glow which is caused by excitation of surrounding air. A single gram of polonium-210 generates 140 watts of heat energy. Since nearly all alpha radiation can be easily stopped by ordinary containers and upon hitting its surface releases its energy, polonium-210 has been used as a lightweight heat source to power thermoelectric cells in artificial satellites. A polonium-210 heat source was also used in each of the Lunokhod rovers deployed on the surface of the Moon, to keep their internal components warm during the lunar nights.

Because of its short halflife, though, polonium-210 cannot provide power for long-term space missions and has been phased out of use in this application.

Also called Radium F, polonium was discovered by Maria Skłodowska-Curie and her husband Pierre Curie in 1898 and was later named after Marie's native Poland (Latin: Polonia). Poland at the time was under Russian, Prussian and Austrian domination, and not recognized as an independent country. It was Marie's hope that naming the element after her home land would add notoriety to its plight. Polonium may be the first element named to highlight a political controversy.

This element was the first one discovered by the Curies while they were investigating the cause of pitchblende radioactivity. The pitchblende, after removal of uranium and radium, was more radioactive than both radium and uranium put together. This spurred them on to find the element. The electroscope showed it separating with bismuth.

A very rare element in nature (found in Earth's crust only in very small amounts that are not harmful) because of the very short half-life of all its isotopes, polonium is found in uranium ores at about 100 micrograms per metric ton (1 part in 1010). Its natural abundance is approximately 0.2% of the abundance of radium. Polonium has been found in tobacco smoke from tobacco leaves grown with phosphate fertilizers.[5][6]

In 1934 an experiment showed that when natural 209Bi is bombarded with neutrons, 210Bi is created, which then decays to 210Po via β decay. Polonium may now be made in milligram amounts in this procedure which uses high neutron fluxes found in nuclear reactors. Only about 100 grams are produced each year, making polonium exceedingly rare.[7]

It has been found that the longer lived isotopes of polonium can be formed by proton bombardment of bismuth using a cyclotron. Other more neutron rich isotopes can be formed by the irradiation of platinum with carbon nuclei.[8]

The case of the poisoning of the former Soviet operative Alexander Litvinenko has resulted in the need for a large number of humans to be tested for contamination with polonium. The method which is publicly explained by the British health protection agency [3] to take 1000 ml of urine in a 2L beaker, add a known activity of either 208Po or 209Po (circa 0.2 Bq) before the addition of nitric acid. The urine sample is then evaporated to dryness, before dissolution in 6 M hydrochloric acid (after treatment with concentrated hydrochloric acid), the mixture is then treated with hydroxylamine HCl salt before adjustment of the pH. The polonium is then plated out onto silver discs before counting with an alpha spectrometer for at least 12 hours. The health protection agency claim that this method can detect and measure 210Po activities as low as 0.02 Bq. [4]