This article is about indoor bowling. For other uses of the term Bowling, please see Bowling (disambiguation).

Bowling is an indoor sport in which a player rolls a large, heavy ball down a polished wooden lane to hit a cluster of pins in order to achieve the maximum amount of pin-falls. Although an individual person can play a game, most bowlers compete against other players as each of them tries to attain the highest number of pin-falls for that particular game. 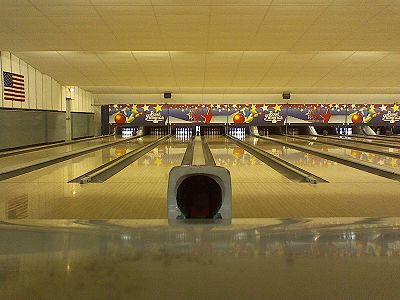 A bowling alley. The reflections of the lanes represent areas with the highest concentration of grease, which affects ball velocity and spin.

Most bowling alleys today have not changed much since their initial construction many years ago, except for mechanical and computer system upgrades. Unless the alley has undergone serious renovation it is not unusual to see the original tables, chairs, fixtures, walls, and ceiling tiles. There are, however, a few very modern, "upscale" bowling alley establishments such as Lucky Strike Lanes where "proper" attire and behaviors are expected.

Several variations of bowling exist, defined by the size of the ball used and the number of pins knocked down. This article mainly focuses on ten-pin bowling, the most popular variation, in which players roll a large ball and try to knock down ten pins arranged in a triangular pattern.

Although the primary piece of equipment used by the player is the bowling ball, it is a requirement that players wear special shoes, "bowling shoes", when playing. These shoes are different from regular shoes in that the heel and sole of the shoe are made of specific materials, not only for protection of the lanes (reduce scuffmarks, damage to the wood), but also for the protection of the player as well. The shoes are designed to have a small amount of "slide", because the momentum from releasing the bowling ball transfers to the foot. A shoe with a pure rubber sole provides greater traction and little or no "give" on the lane surface; as a result the increased friction in the material could result in a potential injury. 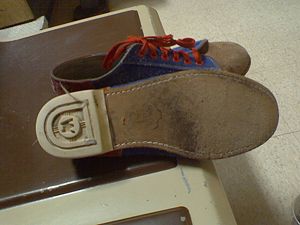 (CC) Photo: Robert W. King
Bowling shoes. The sole of the shoe is leathery while the heel is made of rubber or latex.

Some professional bowlers prefer to use a special "bowling glove" or a wrist brace that holds the wrist and base of the hand into a specific position that reduces stress incurred from forcing the musculature to remain still during the approach and release. This position is not too dissimilar from that of a handshake.

Additionally, some may also prefer towels and a special talc that keeps the bowling ball drill holes free from moisture and lane grease, and reduces the friction of the release, allowing the fingers to slide out of the holes more easily at the release.

Practically all alleys have their own equipment for public use: a relatively large variety of bowling balls and shoes that may be rented for a small cost, but many alleys also have their own "pro shops" that sell these items as well. Consequently, many of the items having been used by many people are subject to accelerated wear and tear even though they are maintained. It is not uncommon to find bowling shoes' shoelaces knotted up and frayed at the ends, and not stiff in any way (in fact they may feel more like slippers). Usually it will take some searching and prodding to find an alley-owned bowling ball that is the right hand and finger size and also of appropriate weight.

When buying equipment (shoes, ball, accessories), one should take into consideration shoe size, ball weight, and whether or not to purchase either a ball bag or a sling. A ball bag has the advantage of having room for both bowling shoes and a ball vis a metal or plastic undercarriage at the bottom of the bag, as well as pockets for non-slip, talc, and a towel whereas a sling is just a piece of cloth shaped and stitched with two handles to carry the ball. Additionally, most pro-shops will be able to recommend a ball weight, measure finger hole sizes, drill, finish, and etch one's name into the bowling ball. It is important to be aware that most pro-shops have "normal" working business hours (9 p.m. to 5 p.m.) and some close even earlier.

For avid bowlers, storage lockers may also be available for a monthly or yearly rental fee.

The bowling balls themselves are usually produced from resin, with a core in the middle having an even denser shape in the center. The core is much like a gyroscope, but without any moving parts. The centermost position of the core is also the widest, providing the means for a gyrational effect while rolling down the lane; building angular momentum quickly at the end[1].

The bowling ball's surface, as determined by the type of material it is produced from, has the largest impact on ball performance.[2][3][4] Balls that have a more porous, coarser surface are able to cut through the oil on the lane, thus providing a stronger potential to "hook" or curve using the energy from its momentum. Balls that have a smoother, finer surface do not have as much as a capability and require more skill from the bowler to manipulate.

The objective of the game is to maximize the possible amount of pins one may score throughout the frames.

Bowling, of all the physical sports, may possibly have the fewest rules concerning how the game is played. Any method may be used to get the bowling ball from the throw line to the pins, which offers a great amount of flexibility. However, a bowler may not cross the throw line; doing so results in a fault or "error" and forfeits any points made in that frame. Additionally, if a ball knocks down any pins after recoiling out of the gutter, those points will be invalidated and the frame may be lost. 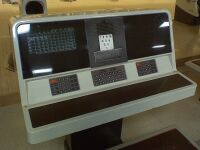 A bowling alley scoring terminal. Most scoring now is automatic, but corrections, adjustments, and changes to bowler status, may still be made. An intercom is built in for calls to the service desk.

In this example, Susan rolls a strike in frame two. Since a strike counts the next two successive throws, the two rolls from frame three are accounted for in frame two, 3+0+10+2+2=17.

In this example, scoring a mark in frame ten allows one additional roll. 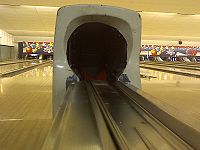 (CC) Photo: Robert W. King
The bowling ball return machine. In the back is a belt-driven bearing that drives the ball into the corral.

Most scoring today is done by a computer system that mostly eliminates the need for hand-calculation. However manual scoring may be required when the computer system fails to score the pinfall correctly.

Modern pinsetters are comprised of several key components: a camera, which views the number of pins standing after a ball has been rolled; a set of rods that pinches around the necks of the pins to lift the ones left after a throw; and a "sweep" that clears the area of downed pins. During each phase of the pinsetter, pins are "recycled" with an elevator that lifts the pins back into the tray and a distributor arm which places pins into the knocked down positions. After the frame is complete, and the pins are all back into the tray, they are replaced back into position for the next frame.

In almost all alleys, there is an element of mechanical failure that can occur in the pinsetting (the device that places the pins is called the "pinsetter") and ball return (a series of belts, ramps, and other machinery that collects the ball after the roll and returns it to the player after each roll) machinery. Two primary systems exist to supplement the implied smooth operation of this system: the "reset" button, and an individual responsible for mechanical corrections who works behind the lanes.[5] An often-displayed error on the scoring terminals is "Please Cycle Pinsetter", which is the result of the computerized pinsetting equipment attempting to self-correct. 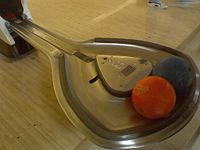 (CC) Photo: Robert W. King
The corral which holds the bowling balls for all players involved in the current game.

The failure of the pinsetter and ball return to operate currently is usually attributable to one of two events:

Before the advent of mechanics to reset the pins, young men called "pinboys" performed the task of resetting the pins after each frame. The pinboys were paid on a rate of how many lanes they could reset over the night. "Automated pinsetters" arrived in AMF Bowling centers in 1946 in Richmond, VA. Although they were initially developed by AMF, the Brunswick Corporation based in Lake Forest, Ill. later offered a similarly-designed pinsetter. 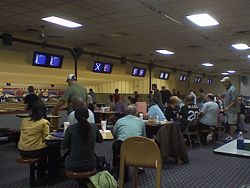 (CC) Photo: Robert W. King
A group of bowlers at an alley on league night.

Regular or professional bowlers are often a pretty tight-knit group, by virtue of leagues that can be very competitive and offer a social environment. Many leagues have specific criteria for who may join: some leagues are women or men-only, some are mixed, and some are divided up by age group. There are many different offerings hosted at alleys. These leagues typically require dues to be paid on a schedule which go not only toward the cost of the games but also toward supplies, such as the manufacture of coordinated bowling shirts for the team or rewards such as trophies, ribbons, or even cash prizes for the ultimate winners at the end of league play.

There are some aspects of common curteousy that are usually followed among league bowlers and are encouraged among amateurs as well, such as allowing a person in an adjacent lane to complete their roll before beginning one's own. Good sportsmanship is also encouraged and is paramount due to the social environment that bowling presents. When a player is doing well or is on a streak, it is not uncommon for others in the league to give that player their due. Bowling leagues generally present a laid-back, fun-friendly atmosphere however fierce the competition may be.

Most bowling alleys offer periods of "open bowl" where lanes are available to the public on a per-game or total-play basis, but this period is only available when leagues are not in session. 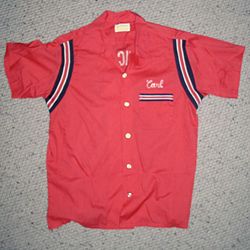 © Photo: Carl Rosendahl
A red bowling shirt. The name is embroidered on the front, while the team name or logo on the back is slightly visible through the opening.

The recommended type of clothing items to wear are comfortable cotton socks, and anything that doesn't inhibit one's ability to roll the ball down the lane or damage the lane(s) and/or equipment. However, some establishments have strict dress codes. Lucky Strike Lanes, a national chain of "bowling lounges" prohibits sweat clothes, sports jerseys, sleeveless or baggy t-shirts, construction boots, hats, and in some of their locations plain white short or long sleeve t-shirts, decorative chains, or clothing that is ripped or stained.

In most leagues it is not unusual to see designed or embroidered "bowling shirts", which have the name of the person and team respectively stiched or printed onto the front and back of the shirt.