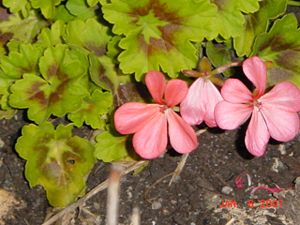 Pelargoniums are bushy flowering plants [1] in the Geraniaceae family, originating from Southern Africa. They are commonly called geraniums, because that is how they were originally classified, since Europeans noticed their similarity to true (botanical) geraniums, (which are now classed is a different genus), and called them South African Geraniums. True geraniums are sometimes called Cranesbills to help distinguish them from pelargoniums. 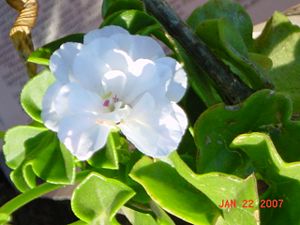 Pelargoniums are best distinguished from botanical geraniums by the shape of their flowers: they usually have two petals on top of the flower and three on the bottom, although in fancier varieties (with compounded petals or more than one layer of petals) this pattern can be hard to discern.[2] They can be roughly divided into four categories: Regal (Martha Washington), Zonal (so called because a coloured band divides the leaf into different "zones", ivy-leaved (because its leaves and climbing/trailing habit[3] resembles that of ivy or hedera) & scented-leaf pelargoniums. Most of the species in these categories are hybrids.[4]All pelargoniums are commonly grown; many are kept as house plants [5]

Pelargoniums are hardy, drought-tolerant and easily-propagated from stem cuttings, so they’re an easy plant for the novice to grow. Many are evergreen and flower throughout the year, and this adds to their popularity. Some can tolerate the occasional frost, but in general pelargonims are not frost-hardy and in cold climates must be brought indoors or treated as annuals.