This article is about Paris, France. For other uses of the term Paris, please see Paris (disambiguation). 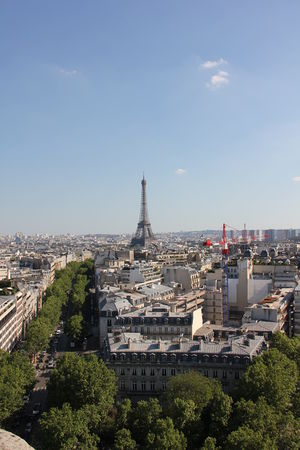 (CC [1]) Photo: Gilles Couteau
A view of Paris from the Arc de Triomphe, with the Eiffel Tower in the background. 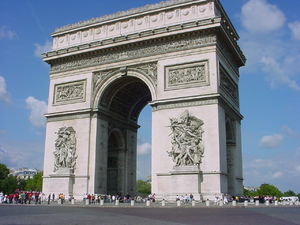 Paris, France is the capital city of France, and the cultural centre of the French-speaking world. It is instantly recognisable by its landmarks such as the Eiffel Tower and the Arc de Triomphe, and is also home to the world-class Louvre museum. It is also known for its many world-class restaurants, from the most elegant three-star establishments to the most humble bistros.

Paris forms its own commune, one of tens of thousands of administrative divisions that the country is divided into. Within the commune, the city divides itself into 20 arrondissements municipaux, or 'municipal boroughs'. Each of these has its own distinct character, unlike for instance the centre of London, which is mostly home to shops and government buildings. Diverse communities inhabit the heart of Paris: there is a Chinatown in the 13th arrondissement and a popular gay village in the 4th. This area is also where visitors will find the Ile St Louis, one of two islands in the River Seine that divides the city; the island is often regarded as a separate 'village', with some in its own little community viewing Paris as another place altogether.[1]

Paris is the centre of national government. The Palais de l'Élysée (Elysée Palace) is the official residence of the President of France. The Mayor of Paris is a highly influential position, with the office holder usually hosting visiting heads of state at the Hotel de Ville (City Hall).[2] Bertrand Delanoë served as Mayor from March 2001 to April 2014. He was the first Socialist incumbent since 1971. In April 2014, another socialist was elected, the first woman to serve as Paris Mayor: Anne Hidalgo. She was reelected to a second term in June 2020.