Oslo (former name Christiania or Kristiania) is the capital and largest city of Norway. The population of Oslo's metropolitan area is 825,105, and the population of the city proper is 538,411.[1] Oslo has a total area of 454 km². 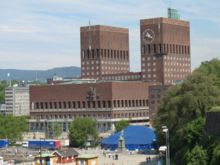 Oslo has seventeen members of the Norwegian parliament. In the term 2005-2009, the following parties are represented:

The following parties are represented in the city council:

Oslo is divided into fifteen boroughs:

The boroughs are to some extent self governed, and are run by local councils elected every four years. The boroughs have responsibilities such as running nursing homes and kindergartens.

In addition to the fifteen boroughs, two areas are separate geographical entities, but do not have an administration of their own. These two areas are the city center (“Sentrum”) and Oslo's surrounding rural areas (“Marka”).