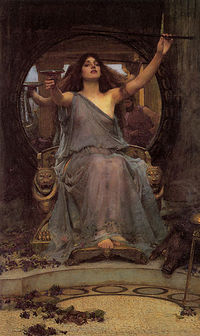 A Victorian representation of Circe. Odysseus was able to evade the enchantment by which she turned his sailors into hogs. Painting (1891) by John William Waterhouse.

An odyssey is a long journey or voyage, interspersed with unexpected difficulties or adventures. The Odyssey refers to an Ancient Greek epic poem, attributed to Homer, narrating the struggles of Odysseus to return to his island kingdom of Ithaca after the Trojan War. It is thought to have been composed around the seventh century BCE and is an important work in the literature of Western civilization

Odysseus, the man of many wiles, having incurred the enmity of the sea-god Poseidon was constantly thwarted by him in his return voyage to Ithaca and his wife Penelope. Poseidon had supported the Trojans in the war, and was further antagonised by the blinding of the Cyclops Polyphemus. Odysseus was, however, supported by the goddess Athene who after ten years enabled him to return home, where he found that a crowd of suitors had moved into his house to court Penelope. He had been absent twenty years (ten for the war, ten for his return) but Penelope had refused to accept that he was dead. Aided by his son Telemachus he killed the suitors and eventually resumed his kingdom.

The form of the poem is unlike the Iliad in that it starts with Telemachus leaving Ithaca to get news of his father and then proceeds to Odysseus, through divine intervention, leaving the island of Calypso. Only later does he tell his previous adventures, so that much of the narration is by the hero himself. Unlike the Iliad, the poem is episodic.

The Odyssey stemmed from an oral culture and was initially sung or recited by poets, perhaps accompanied by a lyre. It was composed in a metric style called dactylic hexameter characterized by a tension between the spoken sounds of the words, their respective meanings, and rhythm, for the purpose of heightening the effect and impact of the poem.

The Odyssey helped define for the ancient Greeks the important parts of their civilization, clarified beliefs in their religion concerning their gods and goddesses, and also served as entertainment.

Many of the episodes form part of the cultural heritage of Western civilization.

The Roman poet Virgil, in his Aeneid, borrowed matter from the Iliad but followed the form of the Odyssey in that he started well into the story and had the hero narrate previous events. This form has been followed by others.