Neutron activation analysis (NAA) is an extremely sensitive technique of radiochemical analysis used to determine the existence and quantities of major, minor and trace elements in a material sample. As opposed to other methods in analytical chemistry, such as mass spectrometry or chromatography, it focuses entirely on the nuclei of atoms, not their molecular structure. It reports the concentrations of all elements in a sample, down to extremely low levels.

When samples are irradiated with neutrons, certain of their elements become radioactive, and emit gamma rays of various energies. "This emitted radiation is a 'fingerprint' of the element, and the amount of radiation given off at a certain energy is indicative of the amount of the element present in the sample. A comparison between specific activities induced in the standards and unknowns provides the basis for computation of elemental abundances. From this analysis, a report is issued giving elemental concentrations in the unknown sample."[1]

The above description implies a measurement at a single point in time. Taking multiple measurements, of "prompt" and "delayed" gamma emission, adds another dimension. Two given elements might emit gammas of the same energy, but since the radioactive isotopes have different half-lives, one will stop emitting before the other. 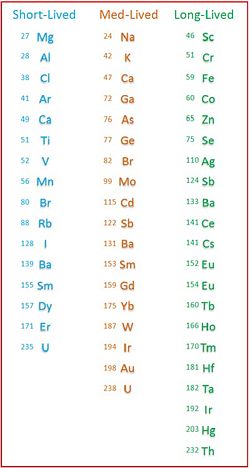 Not all elements absorb neutrons in a manner that makes them detectable by NAA, but over 50 do. Further, they can be further differentiated by the time they stay activated.

Some samples are inappropriate for NAA generally, or for specific facilities. Oak Ridge, for example, warns "Among these are liquids (generally), materials highly corrosive to stainless steel or aluminium, materials that react violently with water, explosives and highly flammable substances, and materials that pose exceptional danger to humans."

The Oak Ridge irradiation container inner dimensions are 10mm × 20mm; other facilities may use other sizes.

Examples of applications from the University of Wisconsin include:

General comparison with other methods

Not all elements are detectable.

Having a nuclear reactor is a prerequisite for the most extensive analytical service, as well as research into NAA. These include:

By examining both ratios of major elements (e.g., carbon, hydrogen, oxygen, nitrogen) as well as the presence of trace elements, NAA, even though explosives are molecules, has been able both to trace the source of explosions after detonation, as well as nondestructively tracing the manufacturer of explosives in situ. [4] NAA has been useful, in like manner, in tracing chemical warfare agents and nuclear materials.

Reference standards are being developed by the National Institute of Standards and Technology. [5], with available samples for RDX, TNT and HMX.

They form part of land mine detection systems, working on the explosive or a plastic casing not sensed by a metal detector.

NAA has significant potential in its use in legal forensics, but it must be presented in proper context. From the legal standpoint,

the interpretation of the analysis presents difficult legal problems that depend almost entirely on the circumstances of the individual case. The analytical chemist is qualified to present the results of the analysis, but his subjective interpretation, as a chemist, is worthless; an expert in statistics is required to present a legal interpretation of the analysis. The expert must have a solid, objective basis for any statement beyond the composition of the measured samples, and the burden of laying an objective foundation for the testimony should rest on the party seeking to introduce the results of the tests. The expert must use well-defined terms which fit the legal issue presented by the facts of the case, and must present his testimony in such a way that the trier of fact clearly understands the limitations of the analysis. [6]