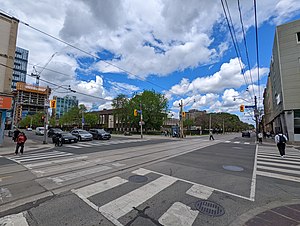 excavation of Moss Park station will require cutting down the large mature trees on the Northeast corner of Jarvis and Queen.

One of the stations on Toronto's new Ontario Line will be named Moss Park, after Moss Park, the park where it will be built, between Jarvis Street and Sherbourne Street, on Queen Street.[1]

The station itself will be built using the cut and cover construction technique, while the tunnels feeding it will be bored through bedrock at a depth of approximately 35 meters.

The announcement of the station has triggered the redevelopment of older properties.[1]

Connection to the 501 Queen Streetcar

The 501 Queen streetcar route is the longest streetcar route in North America, and riders will be able to transfer to and from this route at five Ontario Line stations, including Moss Park.[1] The other stations are at Queen Spadina Station, Osgoode Station, Queen Station and Leslieville Station.