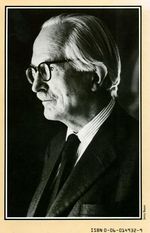 (CC) Photo: Jerry Bauer
Michael Gilbert on the back cover of Mr. Calder and Mr. Behrens, 1982

Michael Francis Gilbert (July 17, 1912 – February 8, 2006) was a British writer of mysteries and thrillers who wrote as Michael Gilbert, eventually publishing 30 novels and 183 short stories over a long career. He was appointed CBE (Commander of the Most Excellent Order of the British Empire) in 1980 and was a founder-member of the British Crime Writers' Association.[1] The Mystery Writers of America named him a Grand Master in 1988[2] and in 1990 he was presented Bouchercon's Lifetime Achievement Award.[3] He also received a Diamond Dagger from the Crime Writers Association for "lifetime achievement" in 1994. A lawyer at Lincoln's Inn in London for many years, Gilbert at one point had Raymond Chandler as his client. Although far from espousing Establishment views as blatantly as his contemporary fellow thriller writer William Haggard, Gilbert's works were all solidly grounded in the same general background, particularly in regard to many of his more sympathetic characters and their attitudes. In this he had much in common with yet another talented contemporary, Victor Canning, although he was less likely to make his intelligence agencies as villainous as some of Canning's.

He was born in Billingshay, Lincolnshire, the son of Bernard Samuel Gilbert, a well-known local writer, and of Berwyn Minna Cuthbert. He was educated in the standard private schools of middle- and upper-class English boys, settings to which he comes back many times in his fiction. The schools themselves were St. Peters in Seaford (1920–1926), Blundell's School in Tiverton (1926–1931), and London University. Unable to finish his study of the law because of lack of funds, he became a schoolmaster at the Cathedral School in the Close at Salisbury. While teaching there, he received his law degree in 1937, graduating with honors—and began work on his first novel, Close Quarters, a mystery in a Cathedral setting. He joined the Honourable Artillery Company when war broke out, serving in North Africa and Italy. In 1943 he was captured and imprisoned in northern Italy near Parma, escaping after the Italian surrender.[2] His POW experience and the roughly 500-mile trek he and another escaping soldier made south to the Allied lines provided material in some of his later books, particularly Death in Captivity. In 1947 he joined the London firm of Trower, Still & Keeling in 1947 in the prestigious Lincoln's Inn, where he eventually became a partner, and practiced until retiring in 1983. He married Roberta Mary Marsden in 1947 and they had two sons and five daughters; one daughter, Harriett, born in 1948, became a novelist and broadcaster for BBC World Service. Gilbert lived for many years at Luddesdown Old Rectory, Cobham, Gravesend, Kent, and died there at age 93—his fictional characters Mr. Calder and Mr. Behrens both lived in similar settings in Kent.[4]

Gilbert had an exceedingly long and very productive writing career, beginning with his first novel, Close Quarters, in 1947 and continuing through 1999 with Over and Out. He wrote almost every sort of mystery and thriller, perhaps spreading himself too thin over too many fields to achieve the reputation that many critics felt he deserved. He wrote police procedurals, spy novels and short stories, courtroom dramas, classical mysteries, adventure thrillers, crime novels, and almost every possible combination of these, all with the same competence, a lean narrative style, and dry, detached wit. "Michael was an exceptionally fine storyteller, but he's hard to classify," said one of his British publishers after his death. "He's not a hard-boiled writer in the classic sense, but there is a hard edge to him, a feeling within his work that not all of society is rational, that virtue is not always rewarded.".[5]

Although he never had a single recurring character for which he became famous such as Agatha Christie's Hercule Poirot or Rex Stout's Nero Wolfe, he did have a number of characters who appeared off and on throughout his works over the years: Inspector Hazlerigg; Inspector Petrella; Inspector Bill Mercer; Chief Superintendent Morrissey; Superintendent Mahood; Mr. Calder and Mr. Behrens; Wilfred Wetherall; Henry Bohun; Jonas Pickett; Nap Rumbold and Major Angus McCann; Luke Pagan and Joe Narrabone; and Tara Fearne and Hugo Bracknell among others. Four collections of his short stories have been published since his death; as of 2016 his published works comprise 30 novels and approximately 183[6] stories in 13 collections. He also wrote several stage plays and numerous radio and television plays.

A well-known legend about Gilbert was that he wrote only during his five-times-a-week commute by train from Kent to Lincoln's Inn and back—a legend that was absolutely true. This, he confirmed, let him "carry out a full and normal day's work as a solicitor, and to devote the evenings and weekends to my family."[7]

Reflecting his lengthy career as a lawyer, a number of Gilbert's books had a legal background or were directly set in courtrooms and lawyer's offices. Most of these, however, were among his earlier works and, unlike some of his contemporaries such as Erle Stanley Gardner, Henry Cecil, and John Mortimer who dealt almost exclusively with legal matters, Gilbert eventually developed a much broader canvas. In addition to straightforward police investigations featuring such characters as Patrick Petrella and Superintendent Hazlerigg, he wrote novels about a boys' boarding school and a serial thrill killer (The Night of the Twelfth); a television action hero who is asked to become the military advisor to the ruler of an Arab sheikdom (The 92nd Tiger); suspense in Communist Hungary just prior to the 1956 Uprising (Be Shot for Sixpence); municiple corruption in a seaside town (The Crack in the Teacup); Etruscan art relics (The Family Tomb); and IRA terrorists and teenage pornography from Holland (Trouble).

One of Gilbert's very earliest novels, Smallbone Deceased, a classic mystery set within the office of a London law firm, is highly regarded by many, including H.R.F. Keating, who included it in his list of the 100 best crime books.[8] Quoted in his New York Times obituary, Gilbert's last American publisher, Kent Carroll of Carroll & Graf, said of him: "He was always so utterly urbane and civilized. He wrote about a sordid world from the perspective of a gentleman. There was something comforting as well as exciting about that.[9]

The British mystery writer and critic Julian Symons called Gilbert preeminent among modern "entertainers" within the field, writers who do not offer "some personal feelings about the world and society," but who think primarily "instead of what will amuse his audience, and if an idea or a subject seems disturbing it is put aside." With Gilbert he went on to say, "Yet there remains an impression that he is not quite content to be appreciated just as an entertainer, but that some restraint (legal caution, perhaps) checks him from writing in a way that fully expresses his personality."[10]

In a comment in an encyclopediac appraisal of his career, Gilbert relied to Symons: "So I am an entertainer? A fact that Harry Keating, in his review of one of my recent books found 'disappointing.' In fact he went on to say that he found this book less disappointing, in this respect than earlier ones. I find the whole thing puzzling. What is a writer to do if he is not allowed to entertain?"[11]

An Example of his Style

Perhaps among his very best books are two collections of short stories about two gentlemanly but exceedingly hard-boiled British counterspies, Mr. Calder and Mr. Behrens, "middle-aged cut-throats" as one of their adversaries bitterly refers to them. Gilbert's urbane yet spare style, with its occasional grimness, is perfectly captured in the final pages of The Road to Damascus, a Calder-Behrens story, in which Mr. Behrens is being held at gunpoint by a traitorous British army colonel in a quiet wood:

"One thing puzzles me," said the colonel, breaking into his thoughts. "During all the time we have been talking here—and I cannot tell you how much I have enjoyed our conversation—I couldn't help noticing that you have hardly moved...."

Mr. Behrens said, raising his voice a little, "If I were to lift my right hand a very well-trained dog, who has been approaching you quietly from the rear while we were talking, would have jumped for your throat."

The colonel smiled. "Your imagination does you credit. What happens if you lift your left hand? Does a genie appear from a bottle and carry me off?"

Gilbert apparently had an abiding interest in, and deep knowledge of, music. Many of his earlier books contain scenes, some of them quite lengthy, involving choirs, in churches, cathedrals, boarding schools, and neighborhood organizations. And a number of his secondary characters are accomplished musicians of one kind or another, some of them at the professional level. He also occasionally uses musical references to indicate a sudden change of direction in his present story. In a typical example from Paint, Gold and Blood, the protagonist has just received an unexpected letter from an old school friend and opens the envelope:

A single note from a flute, or perhaps from a clarinet, had interrupted the rhythm of the tympani and the strings to announce the start of a new movement.[13]