Metal Gear Solid (often abbreviated to MGS or MGS1) is a video game released for the Sony PlayStation on February 26, 1999. Described on the game's logo as "Tactical Espionage Action",[1] the game is a stealth-based third-person shooter, published by Konami, and directed by Hideo Kojima.[2] The game is the third game in the Metal Gear series regarded as canonical, following Metal Gear for MSX2 and Metal Gear 2: Solid Snake for NES.

Metal Gear Solid was the first 3D game in the series. As stated above, MGS is a stealth-based third person shooter, although the player can enter first person view to view the surroundings. Throughout the game, the player needs to avoid detection to advance, rather than kill all enemies, as was the case with most shooting games before the original Metal Gear games on the NES [3]. However, if the player is seen, the game is not over, instead entering the "Alert" phase. A timer appears in the upper-right hand corner, with a countdown starting at 99.99, which decreases quickly if the player hides from the guards who arrive after hearing the alarm. If the player is seen, the countdown goes back to 99.99. After the countdown reaches zero, the game enters an "Evasion" phase, in which the guards are less alert than before, but are still actively searching for Snake. Once the "Evasion" countdown has finished dropping from 99.99 to 00.00, the player returns to normal play [4]. To progress, Snake must advance through each area, mostly in a predetermined linear way. There are boss fights dispersed throughout the game, with each boss being fought twice, with the exceptions of Revolver Ocelot, who is only fought once, and Liquid Snake, who is fought three times (in the Harrier, in Metal Gear, and on Metal Gear).

On a fictional off-shore island close to Alaska, named Shadow Moses, a nuclear disposal site is taken over by Next-Generation Special Forces, led by Liquid Snake and Revolver Ocelot. The game's protagonist, Solid Snake, is called in to stop the terrorists using the Government's weapon which is housed there, as well as rescuing two hostages. The weapon is Metal Gear - a nuclear-equipped walking tank.

Snake receives support via CODEC from his commanding officer Colonel Campbell and Mei Ling, a data analyst. Snake's orders are to rescue the two hostages held there: Donald Anderson, a DARPA chief, and President Baker of ArmsTech, as well as stopping the terrorists launching a nuclear strike with Metal Gear, a walking nuclear-equipped tank.

Snake first finds Anderson, who tells him that both he and President Baker have codes, which are needed to activate Metal Gear. He tells Snake that he told the terrorists his key after Psycho Mantis, a FOXHOUND member, read his mind. However, the DARPA chief suddenly dies from what appears to be a heart attack. Meryl Silverburgh, a woman imprisoned in the next cell, eavesdrops on their conversation and helps Snake fight off the guards who soon arrive.

Snake finds the next hostage - President Baker of ArmsTech. Revolver Ocelot, another FOXHOUND member, arrives and is defeated by Snake. A cyborg ninja appears and cuts of Ocelot's arm with his sword. Both the ninja and Ocelot leave and President Baker says to Snake that he had to resist the psychic powers of Psycho Mantis to stop the terrorists learning about his code, but then he was unable to withstand Ocelot's torture, and eventually gave away his key, causing Snake to think that the terrorists can activate Metal Gear. Baker tells Snake that there is a way to deactivate Metal Gear once it has been started - he must collect 3 card keys and insert them into computer terminals next to Metal Gear itself. Baker gives him one key, but does not know the location of the other two. Just as the DARPA chief did, President Baker dies of an apparent heart-attack.

Meryl, who disguises herself as one of the terrorists, and Snake decide to meet, provided that Snake finds Hal Emmerich, also known as Otacon, who helped design Metal Gear, but didn't know that it would be used for nuclear attacks. Whilst searching for him, Snake encounters one of the terrorists' leaders - Vulcan Raven, who fights Snake in a tank on a minefield. Snake wins, and finds Otacon, only to be ambushed by the ninja. Snake discovers the ninja's true identity: Gray Fox, a man whom Snake had fought against in the game's prequel - Metal Gear 2: Solid Snake. The two engage is a hand-to-hand fight, which Snake wins. The ninja leaves, and Snake rescues Otacon.4

Snake and Meryl meet up, only to be fought by FOXHOUND's psychic, Psycho Mantis. He controls Meryl, making her point her own gun at her head, and threaten to shoot herself if Snake continues to fight. Snake knocks her out, and fights Mantis, eventually winning. Meryl and Snake leave and move on, only for Meryl to be shot by Sniper Wolf, another FOXHOUND member. Snake is forced to run right back through the compound to find a sniper rifle, and returns. He beats Wolf, but then discovers that Meryl had been taken away. Soon, Snake himself is captured.

Whilst in captivity, Liquid reveals to him that the two of them are twin brothers, identical on the genetic level. Ocelot tortures Snake, saying that if he gives in to the pain, Meryl will be killed. After the torture session is over, Snake is imprisoned in a cell with the corpse of the DARPA chief, who has had his blood drained. However, he manages to escape by hiding under his bed. The guard runs into his cell to find him and he uses the time when the door is open to escape.

Snake tries to find Metal Gear, but he is followed by Liquid, who is in a Hind helicopter. Snake manages to take it down using a STINGER missile launcher. Shortly after this battle, Snake is ambushed by Wolf again, but Snake manages to win, despite the severe blizzard. Otacon, who loved Wolf as she cared for the animals, is upset that she is dead, but continues to help Snake.

Snake moves through yet more of the facility, and is forced to fight Raven again, and manages to win. After the battle, Raven, before dying, reveals to Snake that the DARPA chief was really Decoy Octopus in disguise. Shortly after the battle, Master, a man who is helping Snake by CODEC, tells Snake that Naomi has given Snake the FOXDIE virus, which is designed to kill people with certain genetic sequences. It was the virus which killed Decoy Octopus and President Baker. Naomi reveals that she was trying to kill Snake, but, after learning about his past during the mission, felt guilty and decided tell him. She also reveals that she is Gray Fox's sister.

Snake inserts the card into the machine, learning from Otacon that there are not 3 cards: the card he changes shape at different temperatures. He inserts the card in its three different shapes into the computer. However, Snake had been tricked: Ocelot had accidentally killed the DARPA chief whilst torturing him, and so did not learn the code. Decoy Octopus, FOXHOUND's master of disguise, disguised himself as the DARPA chief, even draining his blood. They tricked Snake into trying to deactivate Metal Gear, but inserting the cards in fact activated Metal Gear because it was not yet active. Master Miller then reveals that he is in fact Liquid Snake. Liquid then explains to Snake that the two of them are clones of the legendary soldier Big Boss, products of a government-sponsored project named "Les Enfants Terribles", made to create clones of Big Boss, the "perfect soldier". Liquid thinks that Solid Snake was given Big Boss' dominant genes, and Liquid Snake was given his weaker, recessive genes.

Liquid enters Metal Gear. Snake manages to destroy part of it. Gray Fox appears, who damages it more, but dies in the process, but reveals that he had killed Naomi's parents, and was forced to adopt her through guilt. Snake, continues to fight, and destroys Metal Gear REX. However, Liquid survives. Snake battles him on top of REX, and emerges victorious. Snake rescues Meryl, but, depending on whether or not Snake survived the torture earlier in the game, she may be alive or dead. If she is alive, Snake leaves with her. If she is dead, Snake leaves with Otacon.

The Secretary of Defense contacts Snake via CODEC, informing him that they are planning to destroy the nuclear disposal facility, to hide all evidence of what happened. Snake has to escape before the planes arrive. He and Meryl/Otacon go to find a car, and end up chasing Liquid, who is in another car. They crash, and Liquid is about to shoot Snake, but then he dies from a "heart attack" - the FOXDIE virus. Snake knows that him and Liquid have identical genes, meaning that the FOXDIE virus may soon kill him too.

The game ends with Ocelot contacting the President, revealing (to the audience, not to Snake) that it was Liquid, not Solid Snake, who received Big Boss' dominant genes, and that there is a third clone, Solidus, who is currently the President. [5]

Since its release in 1999, Metal Gear Solid has sold over 6 million copies, making it one of the best-selling PlayStation games [6]. The game received mostly positive reviews, including a 100% rating from GamePro [7] and 98% from IGN [8].

Critics praised the "engrossing" storyline [7], "innovative combination of cinema storytelling, action, and strategy" [7], "exceptional" gameplay [8] and IGN even described it as a "technical majesty" [8].

However, there were also a few criticisms:

It has been claimed that the game can be completed in less than three hours.[9], and the the support team instruct Snake how to proceed through each area, often removing the skill elements to the puzzle sections [9], with the game even being described as "completely devoid of challenge" [9]. Another complaint was that Snake is unable to move or shoot in first-person view, meaning that often enemies can only be shot when they are on screen, after which the player has already been spotted, thus triggering an alert [9]. Also, during the latter stages of the game, an unsubtle anti-nuclear message is given out, which did not appeal to some gamers [9]. 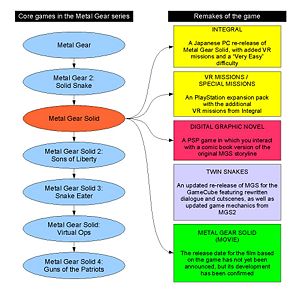 Due to the commercial success of Metal Gear Solid, several enhanced versions were released:

Although not yet released, Metal Gear Solid: The Movie (a tentative title) has been confirmed to be in development: Hideo Kojima announced on his broadcast, named Hide-Chan radio, that Metal Gear Solid will be made into a movie. [13] Since then, it has been confirmed that Sony and Konami will be producing the film, and it will be directed by Kojima, the creator of the Metal Gear series [14]. However, Kojima, after being asked how close the movie would be to the game, said: "Things one can express in a game are different of those in a movie. It would have to be a very different script, almost a different story." [15]