Math Rescue was an educational, platform game created by Redwood Games and published in 1992 by Apogee Software for the DOS operating system. It was designed by Karen Crowther, who originally designed it in order to entertain her children whilst she was at work. Due to this, the main characters are directly modelled after her son and daughter.

The game was released in three episodes, the first one being a shareware release whilst the final two requiring a payment. In 1993 the game was awarded 'Best Educational Game' at the Shareware Industry Awards[1]. The game was the spin-off to the successful Word Rescue, and had a sequel titled Math Rescue Plus. 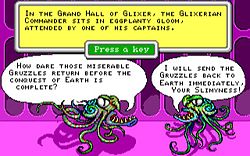 The Glixerians discuss their failure at the end of episode one.

A major crisis had struck the world as numbers are vanishing from everywhere!


On Wall Street, stock brokers were throwing up their hands in despair. The Dow Jones wasn’t down, and it wasn’t up, it was gone!
Your own mother has closed herself in the bathroom and won’t come out because her paycheck is inexplicably blank.

The protagonist just happened to glance out of the window when they saw the cause, a weird creature that looked like a giant nose with arms stealing numbers off of the street signs! In shock they raised a finger and pointed at it, when a huge butterfly appeared in the air and dumped a bucket of slime on the creature, causing it to vanish! The secret to stopping the crisis was revealed, and as long as Benny the butterfly would continue to help it would be possible to recover all of the stolen numbers. 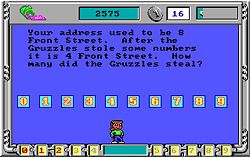 At the beginning of the game the player was asked to enter their name and to choose whether they were a boy or a girl. The character they control in the game was then a child, either male or female depending on their previous answers. They could move left or right, as well as jump.

The game was split into multiple levels, each of which had 'number blocks' spread around them. In order to progress onto the next level the player must collect all of the number blocks (or just ten in easy mode) to complete the key and then reach the exit. In order to collect one of the number blocks the player simply jumped into it, at which point they were transported into a room with numbers blocks 0 to 9 and a mathematical problem written at the top. The player had to work out the solution to the problem and enter the answer by hitting the blocks. Once an answer was entered, correct or not, the player would be returned to the main game. If the player had answered the problem correctly then the number block would disappear, the player is awarded a 'slime' and part of the key would be filled in, however if the player answered the problem incorrectly then the block would remain and a Gruzzle would appear. 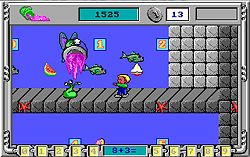 © Screenshot: Apogee Software
Benny the butterfly will 'slime' a Gruzzle as long as the player has some slime left.

Gruzzles were found randomly throughout the game, as well as appearing when a problem was answered correctly. They were the main 'bad guy' of the game, and touching them caused the player to lose a "lid". These lids represented lives and if the player ran out then the level had to be restarted, but extra lids could be collected around the levels. Gruzzles could be destroyed using a slime. When the slime button was pressed Benny the butterfly would appear above the Gruzzle and drop a bucket of slime on it, making the Gruzzle disappear. This used up a slime however, and more slime could only be gained by solving problems.

The player was awarded points for most things, from sliming Gruzzles to solving problems. A few ways to gain extra points were included. Toys and food were scattered around each level and were there only for points gaining purposes. Also, if the number blocks were collected in numerical order from zero to nine then bonus points were awarded.

Additionally at the bottom of the game screen would show a sum, for example "12-8=". Around the level were small garbage trucks moving around, each of which had a number on it. If the player touched the garbage truck with the number on it that answered the sum at the bottom of the screen, then the truck would explode, extra points would be awarded and a new sum would be displayed, however if the wrong truck was touched then the player would lose a lid.

Once the player had completed the key then they could proceed to the door at the end of the level, which allowed the player to move on to the next level. Between levels a bonus stage was played, which is was series of rapid-fire math problems that awarded points, lids and slime but had a short time limit. 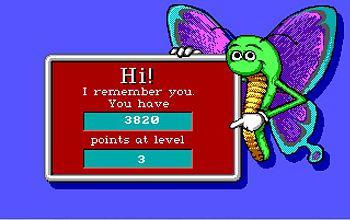 © Screenshot: Apogee Software
If the player had played the game before using the same name, their prior progress would be remembered.

At the start of the game the player chose a difficulty mode of either easy, medium or hard.

Easy mode was aimed at players aged four to seven. It allowed the player to leave a level after only collecting ten icons, and it also gave the player a slime for every problem they solved. The Gruzzles were not very good at chasing the player in this mode, and did not return when they had been slimed.

Medium mode was aimed at players aged seven to ten. Players had to collect all of the icons on a level in order to move on, but it still gave the player a slime for every problem they solved. The Gruzzles had slightly improved AI in this mode, but still did not return once they had been slimed.

Hard mode was aimed at players aged ten and over. As with medium mode players had to collect all of the icons on a level to move on, but they only received a slime for every other puzzle that they solved. The Gruzzles had significantly improved AI in this mode, and reappeared a short time after being slimed.

One bug did exist in early versions of the game. At the start of the game when the player is asked to enter their name, if the name began with the letter 'Q' then the game mistook this keypress as the shortcut for 'Quit' and closed the game. It was therefore impossible to play a character whose name begun with a 'Q'.