A machine gun is a firearm that is designed to be fired in full-automatic mode for prolonged periods of time. In other words, it will fire continuously as long as the trigger is pulled, and has both a means of providing large amounts of ammunition to the firing mechanism, and keeping the firing mechanism and other parts of the gun from overheating. While the earliest machine guns were hand-cranked, more modern weapons either use the mechanical recoil, or divert a portion of the propelling gas, to eject the fired cartridge, load a new cartridge, and fire it. Machine guns with the highest rates of fire do not rely on energy from firing to load, fire, eject, and reload, but have electric motors to carry out some or all of these functions.

Since the invention of machine guns, there have been rough classifications into heavy and light, or sometimes heavy, medium and light types. In current use, a heavy machine gun will fire a round of at least .50 caliber (i.e., 12.7mm); weapons that fire 20mm or larger rounds are called autocannon. Medium and light machine guns usually fire .30 caliber (7.62mm) or smaller cartridges; many light guns use the 5.56 (.223 caliber) round fired by the U.S. M-16 family rifle.

A light machine gun is easily carried and fired by one person, possibly with an assistant to help provide ammunition. A strong person can fire a light machine gun, usually in fairly short bursts, from a standing position, but all machine guns are more controllable when they have some mechanical support. That support may be a bipod, tripod, a swivel mount attached to a vehicle, or the gun may be built into the structure of an airplane, tank, etc.

Machine guns differ from automatic rifles in that they have a large-capacity ammunition storage, such as a continuous belt or at least a box containing several hundred rounds, rather than a magazine containing 20 or 30 rounds, as in, respectively, the M-16 or the AK-47. They also have provisions for cooling in prolonged fire. 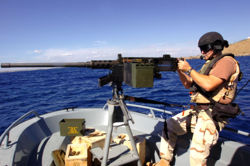 In heavy and medium machine guns of roughly First World War vintage, the barrel and other mechanisms had a cooling jacket through which water was circulated. With improvements in metallurgy, water cooling is no longer needed, although it should be noted that the fastest-firing machine guns are in aircraft, and cooled by the high-speed air through which the aircraft flies.

Heavy machine guns for infantry use, however, usually have some means of quickly changing the barrel, which will get red-hot and deform with continuous fire. They also fire from an open bolt, enabling the breech and firing mechanism to be air cooled while ejection and reloading are in progress.

Introduced in the early 1960s were machine guns, and then autocannon, with unprecedented rates of fire. Rather than being gas- or recoil-operated, loading, firing, and extraction were done by electric motors. The weapons often had multiple barrels that rotated to the firing chamber, which allowed there both to be separate motor-driven positions for loading, firing, and extraction; and allowing barrels to have some cooling time between shots. They were often called "Gatling guns" after one of the first 19th century machine guns, which used hand-cranked rotating barrels.

A typical 7.62mm version, the General Electric "minigun", fired at a rate of 2,000 to 4,000 rounds per minute. Some aircraft versions reached 6,000 rounds per minute. Obviously, unless there was a considerable volume of ammunition storage, miniguns built into aircraft could carry enough ammunition for only a few bursts. If used in a dogfight, however, there was a very high hit probability due to the large number of rounds fired.

In applications such as the AC-47 or AC-130 gunships, the rotating-barrel guns were fed from large ammunition boxes. They still needed cooling time, and often a crew of gunners to change boxes.

Tactical use in land warfare

Small infantry units, such as 10-13 man squads, have one or two light machine guns, used to keep the enemy from moving out of protective cover while the other members of the squad maneuver. The most portable light machine guns, such as the 5.56mm U.S. M249, a derivative of the Belgian Minimi, are called squad automatic weapons.

Depending on the organization, there will often be medium machine guns, usually 7.62mm in NATO (e.g., M240) on most vehicles, and perhaps a number of portable guns as a resource at rifle company level.

At the infantry weapons company level, supporting a battalion, there are usually heavy (e.g., .50 caliber M2) machine guns, which will be assigned to strengthen companies. These are often vehicle-mounted, although in light infantry units, they may be broken into a tripod, gun, and ammunition, to be assembled at the point of use.

Machine guns have been used by foot soldiers against aircraft, but the speeds of aircraft are such that they have largely been replaced by surface-to-air missiles, especially man-portable air defense systems (MANPADS) such as the FIM-92 Stinger.

Use in air warfare

The trend in modern aircraft is to use autocannon rather than machine guns, for greater range and lethality. It is still common to see machine guns on swivel mounts in the doors of helicopters, or on light helicopter turrets. Some special operations helicopters have electrically-powered rotating-barrel machine guns.