Logistics make it possible for military units to be ready to fight, and have the materials to conduct and sustain the fight. Sometimes, in very informal military discussions, someone will offer a toast: "Amateurs talk tactics. Dilettantes talk strategy. Professionals talk logistics." Obviously, the toast was offered by someone with a bias toward logistics, but there is much truth to it. Strategy determines why to fight, the form of one's forces, and where to fight. Tactics defines how the fight is conducted once begun.

Napoleon is said to have observed "an army marches on its stomach", meaning that no army can function without a supply of food, and making sure that food is available, in adequate quantities, is a basic part of the supply discipline of logistics. A different discipline, transportation, ensures the food gets from the port where it arrives on a ship, to the cooks that will prepare it. Both operational procedures and research have places in research, just as combat forces have their rules on how to encircle a military force with a helicopter-borne (i.e., air assault) unit, logisticians worked out the procedure by which a short-ranged helicopter can be refueled at each jump closer to its target. 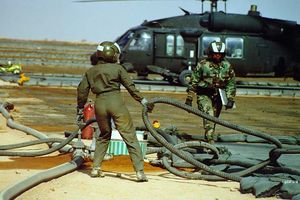 Detailed view of helicopter refueling in the desert

In the United States military, chosen here because it tends to write down more about the way it does things than any other military, logistics is[1]:

The science of planning and carrying out the movement and maintenance of forces.

— Department of Defense Dictionary of Military and Associated Terms

NATO logistical doctrine [2] recognizes each nation will have its unique approach, but "NATO's principles reflect the additional requirements of operating together in a multinational Alliance." NATO has a useful abstraction of the orientation both of the logistical aspects of obtaining, as well as delivery thereof.

The primary manual on U.S. logistical doctrine goes further, and defines its scope as "the integration of strategic, operational, and tactical sustainment efforts within the theater, while scheduling the mobilization and deployment of units, personnel, equipment, and supplies in support of the employment concept of a ... commander. The relative combat power that military forces can bring to bear against an enemy is constrained by a nation’s capability to plan for, gain access to, and deliver forces and materiel to the required points of application across the range of military operations."[3]

Napoleon Bonaparte made significant advances in logistics. While he did not have a full general staff organization in the modern sense, he still had officers moving ahead of his armies, being sure they would have the appropriate resources from the local area, as well as weapons and other supplies from the rear. [4] Napoleon's campaigns, however, were directed against the defeat of armies in the field. In the American Civil War, a major strategic emphasis shifted to destroying the enemy's logistics, destroying the ability of armies to continue fighting. In such a situation, Carl von Clausewitz would describe logistics as a center of gravity.

Changing centers of gravity from combat forces to logistics was partially the result of technological advances such as railroads and the telegraph. Another key aspect was the increased lethality of repeating and rifled weapons, such that a prepared defense could be nearly invulnerable to direct attack, as tragically demonstrated by Pickett's Charge at the Battle of Gettysburg. Doctrine had not yet evolved to make use of breakthrough techniques, such as was seen by the failure of the Battle of the Crater.

William T. Sherman attacked logistics in several ways, starting with the destruction of railroads and telegraph lines. Sherman's March to the Sea demonstrated destroying the means of production.

Classes of Supply and Support

A number of standard classes are defined recognized at the United Nations level,[5] the management of which vary in the offense and defense. Additional special cases for retreats and pursuits are beyond the scope of this article. [6]

In military operations, there typically must be two types of logisticians: a staff logistics officer and a commander of the support organization. Evem in organizations as small as a battalion, commanded by a lieutenant colonel, the "S-4", usually a captain, has the staff responsibility, but the executive officer, a major, runs the rear support area. For a large campaign, such as the Gulf War, MG Dane Starling was the "J-4" deputy chief of staff for logistics, United States Central Command, but the actual rear operations were conducted by the 22nd Support Command, under LTG William (Gus) Pagonis. Pagonis was the only general promoted during the Gulf War, as GEN Schwarzkopf decided he needed authority equal to the other three-star corps and component commanders.

The section above on supply classes gave guidance on priorities. There are, however, several issues in actually providing the supplies even within a category.

"Push" models are driven by the logisticians, sending forward predicted amounts. This has the advantage of relieving the supported staff from the need to prepare supply requests, but does create the possibility that the units of issue "pushed" may not be what is most needed. "Pull", on the other hand, is driven by the combat unit staff.

As advanced militaries develop automated inventory networks between the supporting and supported networks, the relationship between push and pull may disappear. A standard ammunition issue might contain, hypothetically, 1500 155mm howitzer shells, 3000 81mm mortar shells, and 100,000 rounds of 5.56mm rifle and machine gun ammunition, but if only the artillery ammunition was expended, only it needs to be resupplied. An intelligent logistics system might recognize a higher-than-usual utilization and push additional shells forward.

Supply units providing general and direct support, in turn, need to be resupplied with bulk packages of the items they will issue at the "retail" level.

In naval operations, high-speed replenishment ships travel with the tactical formations and provide direct support. Replenishment ships tend to be multifunctional, handling fuel, ammunition and general supplies. They, in turn, are resupplied at sea, usually by specialized transports such as ammunition ships and oilers.

Ships and aircraft may also return to bases for large supply. Such ports and airfields are not always secure; the USS Cole' (DDG-67) was struck by a suicide attack in the neutral port of Aden, Yemen. In Operation DESERT STORM, the largest single loss of life came when an SS-1 SCUD missile hit a logistical facility.

In general, maintenance is organized into "echelons", the number of which vary with the type of unit, country, size of operation, and other factors. Depending on the item being maintained and the nature of the part being fixed, there often needs to be a decision, perhaps specific to each echelon, of "repair versus replace". It is possible to field-strip and clean a jammed rifle, but it is not possible to do maintenance on the monolithic circuit boards and integrated circuits of a modern tactical radio. Some electronics can have board-level replacements, but others are effectively sealed units. 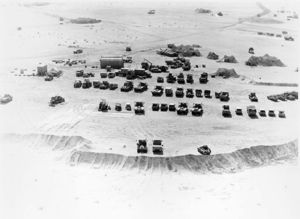 One of the challenges facing multinational coalitions and developing militaries is the commitment to maintenance, and the cultural attitudes toward it. This can be a problem even in the "First World", as people of different countries had different experiences growing up and living in the culture. For example, in the Second World War, the British needed to set up a transport branch of the Royal Army Service Corps, and train and assign soldiers as drivers who could do self-maintenance. In the U.S. military of the time, the default assumption was that a soldier could drive, and at least change a tire and add oil, at the time of enlistment.

Some cultures regard manual work as undignified. In a wealthy nation with such beliefs, third-country contractors do the work in peacetime, but, when war breaks out, and a tank engine stops because the air filter is clogged, there may be no contractors on the battlefield. Even the U.S., where maintenance is culturally acceptable, the practice of outsourcing raise issues of whether maintenance technicians will be present in a place where bullets fly.

Beans and bullets do not last well if they are kept in the rain. Logisticians have to have transportation routes from the source of supply, to the warehousing and distribution points, to the supported units. Minimally, this means that things such as roads, airfields, docks and warehouses need either to be built by civil engineers (contrast with combat engineers), or perhaps it will be possible to locate, rent, and customize warehouses and other facilities.