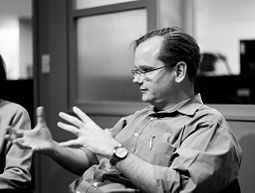 Lawrence Lessig (1961- ) is an American jurist, academician, the forefather of the Free Culture Movement and the founder of Creative Commons. He is a member of the Board of Freedom House. Once a law clerk for circuit judge Richard Posner and Supreme Court Justice Antonin Scalia, Lessig later became an ardent advocate for loosened governmental regulations on copyright, and more broadly, intellectual property. He argued before the Supreme Court as the counsel for Eric Eldred in Eldred v. Ashcroft, which unsuccessfully challenged new retroactive extensions of copyright.

Lessig is the author of several books, include Free Culture and Code and Other Laws of Cyberspace. He currently teaches law at the Stanford Law School.