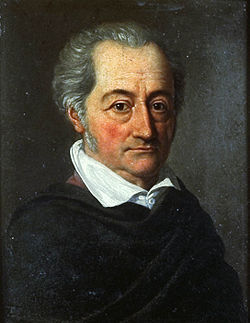 Johann Wolfgang von Goethe (August 28, 1749 - 22 March 1832), often referred to simply as Goethe, was a German writer and poet. He is still considered the greatest of all German writers. He is best known for his magnum opus, the two-part drama Faust.

Goethe was one of the leading literary figures in German literary movements of the later 18th and early 19th centuries, including German or Weimar Classicism which overlapped with Sturm und Drang and Romanticism.

Goethe was born August 28, 1749 in Frankfurt, which at the time was an Imperial Free city in the Holy Roman Empire. He was the son of Johann Caspar Goethe (1710-1782) and Catharina Elisabeth Textor (1731-1808), who was the daughter of the mayor of Frankfurt. He was educated privately, learning Latin, Greek, French, and English in addition to all other common subjects of that time. He was attracted to drawing and literature at a young age.

He was formally educated in law, at first in Leipzig (1765-1768), and then, after a long illness and convalescence spent at home in Frankfurt, finally in Strasbourg. But his heart was not in the law and after he became acquainted with Johann Gottfried (von) Herder he started to develop his ideas for a new German literature. One of his major influences was the English playwright William Shakespeare.

His first literary endeavor was the successful 1773 drama Götz von Berlichingen based on the memoirs of a noble adventurer and poet from the German Peasants' War. Though forced to supplement his income with a legal practice, he continued to grow as a writer and poet. In 1774, he published the book that made him famous throughout Europe, The Sorrows of Young Werther (Die Leiden des jungen Werther).

Goethe's short lyrical poem 'Wanderer's Nightsong II' (Über allen Gipfeln) is considered one of the best poems ever written in German. Because Goethe's poem is lyrical and includes both rhyming and alliteration, it loses much in translation. It is shown here is German and English: