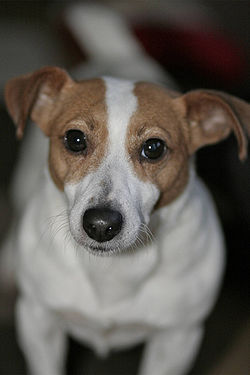 The origins of the Jack Russell Terrier:

The actual lineage of John Russell’s terriers is a mystery, but it is generally accepted that Russell stated that while a student at Oxford University, he spied a little white-with-tan terrier bitch on a milkman’s wagon and bought her on the spot. The bitch was named “Trump”, and she is credited as being his main brood bitch. Unfortunately, the only surviving pictures of Trump were painted after her death; one of these is in the Harness Room at Sandringham Castle, having been commissioned by the Prince of Wales. Fuzzy reproductions show a not particularly attractive little dog, and it is not clear what qualities Trump exhibited which made Russell buy her outright, without having seen her in action.

There was a scramble for Russell’s dogs after his death, and it is less than certain who ended up with “Jack Russell’s terriers”; the sister of his studmaster appears to have acquired a few. Certainly, the chances that any of the bloodlines of the dogs presented today as Jack Russell Terriers or Parson Russell Terriers or any of the variants thereof are direct descendants of Trumps or any of the parson’s dogs, are slim.

The Jack Russell’s endearing facial expressions, feisty personality and interminable cuteness make it a natural choice for television and the cinema. Some famous Jack Russells include Wishbone, the title character of a popular children’s television series in the United States, and Eddie, the clever, irrepressible dog belonging to character Martin Crane on the sitcom Frasier. “Scooter”, the dog star who portrays Wishbone, is a veteran performer with many television commercials to his credit. He reportedly hates swimming and has two stunt doubles and a body double. Eddie was played by a dog called “Moose”, but later in the series, Moose also had a stunt double; his son “Enzo” stepped in for the more physically demanding tricks to spare his aging dad. Moose and Enzo also appeared in the movie My Dog Skip.