Isambard Kingdom Brunel (1806–1859), was a leading British civil engineer, famed for his bridges and dockyards, and especially for the construction of the first major British Railway, the Great Western, and for inventing the modern iron ship.

He was the only son of Marc Isambard Brunel (1769-1849), a royalist who fled the French Revolution and built a career as a mechanical engineer in London.[1] The father is best known for the Thames Tunnel, the first major underwater tunnel.[2] The son at age 14 was sent to France for schooling, but failed the admission test for the Ecole Polytechnique, studied watchmaking in Paris; he returned to London to apprentice with his father. He was badly injured in an 1828 accident on the Thames Tunnel project. Recuperating in Bristol, he was the prize winner of a local contest, proposing a spectacular suspension bridge over the River Avon. Funds ran out, but the bridge was eventually completed as a memorial after his death. Isambard Brunel was a volcano of brilliant ideas at the cutting edge of civil engineering, but based on rigorous mathematical designs and models. Bristol businessmen financed his plans to upgrade the city’s docks. Their confidence in him led to his appointment in 1833 (at age 26) as engineer to the Great Western Railway (GWR), covering the 118 miles between Bristol and London. The first major railway in the world, and the largest engineering project Britain had as yet attempted, GWR consumed Brunel’s phenomenal energy for 15 years. The result was a high speed network in south-west England that became a model copied all over Europe and the world. It cut the travel time from 4 days to 4 1/2 hours. In 1849 Brunel introduced the express train, which made the 194 mile run from London to Exeter (with three stops) at the astonishing speed of 43 mph. 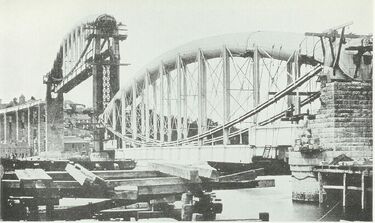 Royal Albert bridge at Saltash, England, showing the second suspension bridge unit being lifted into place in 1858. An elaborate system of flag signalling was used for the difficult operation.

Brunel set the standard for a very-well-built railway, using careful surveys to minimize grades and curves. That necessitated expensive construction techniques and new bridges and viaducts, and the famous two-mile-long “Box Tunnel.” In order to cross the Tamar estuary, Brunel designed a combination of arch and suspension bridge with two spans of 455 feet each, using a system of struts to solve the oscillation problem associated with trains using suspension bridges. It cost £225,000 and opened in May 1859. His assistant Daniel Gooch designed the GWR locomotives. One controversial feature was the wide gauge (7 feet, instead of the normal 4'8"), which added to passenger comfort but made construction much more expensive and caused difficulties when eventually it had to interconnect with other railways using standard gauge; after his death the gauge was changed to normal.

Brunel astonished Britain by proposing to extend the GWR westward to North America by building steam-powered iron-hulled ships. He designed and built three ships that revolutionized naval engineering. The "SS Great Western" was by a factor of two largest ship of its day, a paddle-wheeled, wooden-hulled steamship of 2300 tons displacement. The huge size meant there was ample room for fuel, as it demonstrated on its maiden run in 1838. The "SS Great Britain," of 1843 was even more innovative--at 3018 tons, it was the first large iron ship, having a strong hull of riveted wrought-iron plates; and it was the first large screw-propelled ship (as opposed to paddle-wheeler). It made its first transatlantic voyage from Bristol to New York in 14 days (compared to 75 days for sailing ships). The "SS Great Britain" launched the modern era of passenger ships. It was recovered in 1970 and relaunched in 2005 as a maritime museum. The Royal Navy soon adopted screw propellers in place of paddle wheels. Finally came the “Great Eastern” (designed in 1853, finished in 1858, scrapped in 1889), at 680 feet long, displacing 22,000 tons, was the largest ship built before 1900. Brunel made it so large that it could carry its own coal supply for a round trip to India. It was seriously underpowered with only 1600 horsepower, and handled Atlantic storms poorly. It could hold 4000 passengers in comfort (when they were not seasick) it was a technological triumph; but it was far too big and expensive and became a financial disaster for Brunel and his backers. It never took passengers to India, but it did play a major role in communications history by laying four telegraph cables under the Atlantic, and others to link Bombay and Aden, in 1865-1872.

Brunel was had quick mind, an unusually rich imagination, and a charismatic driving forceful personality that brooked no opposition. He was active in many public affairs. The “Napoleon of engineers,” he thought more of glory than profit.[3] He died young, leaving an estate of under £90,000, having lost much of his fortune in the “Great Eastern” venture.