From Citizendium
(Redirected from IUPAC)
Jump to navigation Jump to search

The U. S. National Academy of Sciences is the U.S. National Committee for the International Union of Pure and Applied Chemistry (i.e., the IUPAC's National Adhering Organization for the United States).[3]

The international headquarters office of the IUPAC is located in Zurich, Switzerland. The administrative office, known as the "IUPAC Secretariat" and headed by the IUPAC executive director, is located in Research Triangle Park, North Carolina, United States.[1] 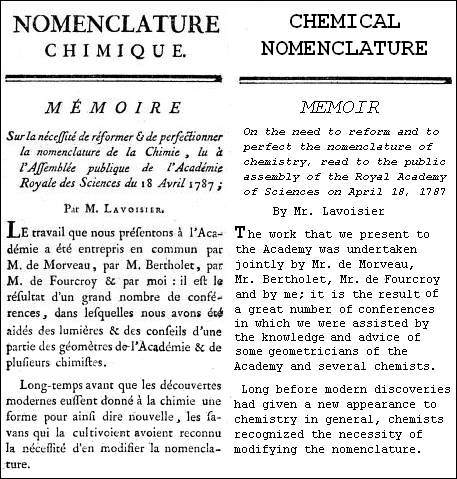 (PD) Photo: Antoine-Laurent Lavoisier
Introduction to the 1787 publication by Guyton de Morveau of his recommendation for creating a new chemistry nomenclature. (The original French version is on the left with English translation on the right.

In 1782, the French chemist Louis-Bernard Guyton de Morveau published recommendations for the nomenclature of chemicals.[4] His system was later refined in collaboration with Antoine-Laurent Lavoisier, Claude Louis Berthollet and other French chemists.[5] Their work was also supported by the Swedish chemist Jöns Jakob Berzelius.[6][7]

Guyton de Morveau's recommendations covered only what today we refer to as inorganic compounds. With the massive expansion of organic chemistry in the mid-nineteenth century and the greater understanding of the structure of organic compounds, the need for a better system of nomenclature was felt. An international conference was convened in Geneva in 1892 by various European national chemical societies, from which the first widely accepted proposals for standardization arose.[8]

In 1911, the International Association of Chemical Societies (IACS) met in Paris and produced a set of proposals for standardization of chemical nomenclature, physical constants and physical properties that the association should address.[9] A commission of the association was set up for that purpose in 1913 but its work was interrupted by World War I. After the war, in 1919, chemists from academia and industry formed the International Union of Pure and Applied Chemistry (IUPAC) and the task of standardization was passed to them. The IUPAC first appointed commissions for organic, inorganic and biochemical nomenclature in 1921 and continues to do so to this day.[10]

Divisions of the IUPAC

The three operational committees are:

There is also a "Joint Commission on Biochemical Nomenclature" between the IUPAC and the International Union of Biochemistry and Molecular Biology (IUBMB) referred to as the JCBN. 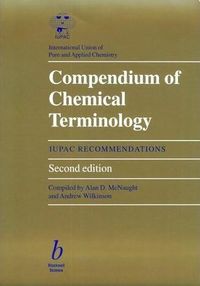 © Photo: Amazon
Front cover of the Gold Book, one of the IUPAC's "color books".

IUPAC's nomenclature books are used by chemists in academia, government and chemical industry throughout the world:[11]

Pure and Applied Chemistry - The IUPAC's official journal is published monthly and contains recommendations, reports, and lectures from symposia.

Macromolecular Symposia - Published by Wiley-VCH with normally 14 issues per year. Presents contributions in the field of macromolecular chemistry and physics from selected international meetings sponsored by IUPAC, the European Polymer Federation (EPF), the American Chemical Society (ACS) and the Society of Polymer Science, Japan (SPSJ).

Solubility Data Series - This series is published in issues of the Journal of Physical and Chemical Reference Data (JPCRD)which is published by the American Institute of Physics (AIP) for the National Institute of Standards and Technology (NIST). Content is published online daily and collected into quarterly online and printed issues four times a year.

IUPAC develops and publishes definitive and up-to-date data on atomic weights and isotopic abundances. It also publishes a wide variety of other chemical data of value to chemists and chemical engineers. For example:[9]

IUPAC is also involved in establishing standard methods for use in analytical, clinical, quality control and research laboratories.

IUPAC Congress and other meetings

The history of the Congresses sponsored by IUPAC and it predecessor (the IACS) dates back to 1894. There has been a Congress every two years except for interruptions caused by the two World Wars.[9]

Each year, IUPAC also sponsors many independently organized symposia that cover a wide range of specialized topics in chemistry. Sponsorship by IUPAC attests to the quality of the scientific program and indicates the host country,s assurance that scientists from all countries may participate.[9]

IUPAC sponsors a continuing series of conferences on "Chemical Research Applied to World Needs" (CHEMRAWN). These conferences focus on topics in chemistry that have socio-political impact, such as availability of raw materials, food chemistry, and environmental matters.[9]