Hunger describes the desire of animals to eat, and is activated by many different cues. In vertebrates, the motivation to eat is controlled by the hypothalamus, and is generally strong when the energy expended by the animal exceeds the energy consumed. This imbalance is signalled to the brain in many different ways. Hunger can also be applied metaphorically to cravings of other sorts. The term is used more broadly to refer to widespread malnutrition or deprivation among populations, usually due to poverty, conflicts or instability, or adverse agricultural conditions (famine).

Hunger as a condition

The term hungry is commonly used to mean having an appetite for food or to be ready for a meal. After a long time without food, the sensation of hunger becomes progressively more severe, until it is acutely painful. As hunger grows, most living things will experience some internal effects. In humans, hunger can cause a gurgling sound with a bubbling feeling in the small intestine (many mistakenly think the stomach does this), and can shrink the stomach. Prolonged hunger will drive people to eat substances with no nutritional value (such as grass and soil) simply to fill their stomachs, but doing so has an adverse effect on energy balance as energy is still required to digest these substances.

In 1938, the experimental psychologist Karl Lashley, in a paper entitled The Experimental Analysis of Instinctive Behaviour, proposed that hunger was not simply a reflex response to stimuli from the empty stomach. [1] He argued that rather it was a complex instinctive behaviour, that involved the brain in switching between different motivational states (non-hungry to hungry) in response to a complex interaction between many different stimuli, that had to involve the central nervous system in making some key decision. In the hungry state, innately programmed patterns of food-seeking behaviour were activated. The problem was that, at that time, Lashley had no idea what parts of the brain were involved in these processes and decisions. He set about trying to answer this question by training rats to run a maze in order to gain food. He used this to assess how hungry rats were, and then studied the effects of making small lesions in different parts of the brain. This experimental model became widely adopted by other researchers, and led to the recognition of the particular importance of specific regions of the hypothalamus. In particular, the lateral hypothalamus was identified as a "hunger center" and the ventromedial nucleus as a "satiety center", although clearly many other parts of the brain were also involved in various ways.[2]

After lesions to the lateral hypothalamus, animals do not eat spontaneously. Conversely lesions to the ventromedial nucleus cause animals to overeat to excess, and become grossly obese.

The hypothalamus is a very complex part of the brain, which contains many different types of specialised nerve cell and controls many different physiological functions. One important role of the hypothalamus is to regulate food intake and metabolism. Since the experiments of Lashley, it has been generally accepted that appetite for food is in part governed by a balance between hunger signals and satiety signals that converge at the hypothalamus. Apart from the lateral hypothalamus and the ventromedial nucleus, the arcuate nucleus of the hypothalamus has a particularly important role. The arcuate nucleus contains several different populations of nerve cells, one of which makes a neuropeptide, neuropeptide Y, which is a very potent orexigen (when injected into the brain it causes animals to eat voraciously). These NPY neurons are activated by ghrelin, a hormone that is secreted from the empty stomach, and whose concentration in the blood falls after each meal and rises progressively until the next.

Ghrelin is thus a major physiological hunger signal. Conversely, the NPY cells are inhibited by leptin, a hormone secreted from adipocytes (fat cells) that circulates in the blood in proportion to the energy stores of the body; leptin thus suppresses the desire to eat. There are some cases of humans born with leptin deficiency due to a genetic mutation - these individuals are grossly obese, but their body weight will return to normal if they receive daily injections of leptin. However these cases are extremely rare, in most cases of obesity, the individuals have high circulating concentrations of leptin (as expected from the large fat mass) but appear to be insensitive to leptin - this "leptin resistance" appears to be similar to the "insulin resistance" seen in type 2 diabetes mellitus.

Ghrelin acts on cells via a G-protein coupled receptor called the growth hormone secretagogue receptor (GHS receptor) - discovered and named before ghrelin itself was discovered and named in 2000. The GHS receptor is densely expressed in both the arcuate nucleus and the ventromedial hypothalamus, and it activates NPY-containing neurons. Leptin also acts through G-protein coupled membrane receptors, and leptin receptors are expressed in many brain regions including particularly the arcuate nucleus. Leptin inhibits NPY neurons and activates neurons that make alpha-MSH. Exactly how ghrelin and leptin reach their targets in the brain is not wholly clear: both are large peptides that do not cross the blood-brain barrier readily. It is thought that there is a specific mechanism for transporting leptin into the brain in the choroid plexus, but whether something similar exists for ghrelin is unclear. The arcuate nucleus is adjacent to the median eminence, an area of the brain which lacks a blood-brain barrier, so it is also possible that ghrelin and leptin gain direct entry into the brain at this site.

Leptin and ghrelin are not the only signals that reach the hypothalamus; cells in the ventromedial nucleus and some in the lateral hypothalamus are directly sensitive to glucose concentrations - some are inhibited when glucose concentrations are high, others are facilitated. The hypothalamus also contains neurons that are sensitive to insulin - insulin is secreted overall in amounts proportional to the size of the body fat stores, so is another signal that the brain can use to evaluate its energy reserves. Other hormones are also produced by the stomach, pancreas and gastrointestinal tract, including pancreatic polypeptide and the products of the gastrointestinal L cells, glucagon-like peptide 1 (GLP-1), oxyntomodulin, and peptide YY (PYY 3-36) which appear to act as satiety signals.

These signals are only part of the complex systems regulating when and how much we eat. In humans as in many other animals, we eat at generally consistent times of the day, and we are conditioned to expect food and become hungry at these times. Our appetite for food can also be potently stimulated by the smell and taste of food. Experimental laboratory animals, even though food is freely available at all times, will still tend to confine their eating to meal times, according to a circadian rhythm; rats for example generally become active and start to eat soon after the lights are switched off. Such rhythms are controlled by another nucleus in the hypothalamus - the suprachiasmatic nucleus. How much we eat is also affected by our levels of stress and anxiety - so called "comfort eating." Again, the hypothalamus is critically important - the paraventricular nucleus of the hypothalamus is the major control centre of the hypothalamo-pituitary-adrenal axis (HPA axis) - the body systems that control our responses to stress. 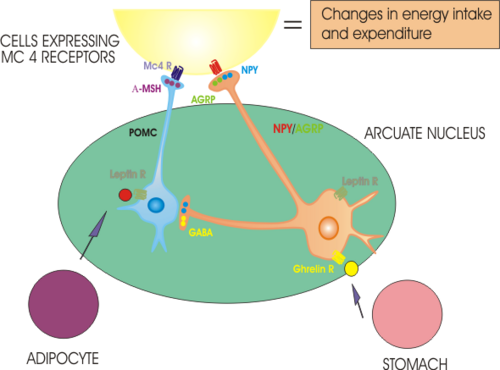 Satiety, or the feeling of fullness and disappearance of appetite after a meal, is mediated by signals that arise from the stomach and gastrointestinal tract. These signals, which include signals arising from stretch receptors as the stomach is distended by food, and chemical signals arising in the stomach as the result of secretion from cells regulating digestion, activate afferent fibres of the vagus nerve. For example, the gut hormone cholecystokinin (CCK) is secreted from the duodenum during a meal, and activates specific receptors (CCK-A receptors) on the nerve endings of the gastric vagus nerve. The vagally-mediated signals reach the hypothalamus via nuclei in the caudal brainstem - notably the nucleus tractus solitarii. Noradrenergic neurons in this area play a particularly important role in carrying these signals; these neurons project to many different parts of the hypothalamus.

Eating appears to stop when the satiety signals reaching the hypothalamus are sufficiently strong to activate particular populations of neurons that make "anorexigenic" peptides - peptides that when injected into the brain are potent at suppressing hunger. There are many different anorexigenic peptides just as there are many different orexigenic peptides - the neural circuitry that regulates appetite is extremely complex. However one of the most important anorexigenic peptides is alpha melanocyte-stimulating hormone (alpha-MSH) which is made in another population of neurons in the arcuate nucleus. These neurons project to many different parts of the hypothalamus where alpha-MSH is released and acts on other neurons via specific melanocortin receptors.

Genetic disorders that prevent alpha-MSH being made or which prevent its normal actions result in individuals who are grossly obese as a result of chronic overeating.

In recent years, it has become apparent that many of the neural networks involved in regulating appetite use many specific neuropeptides as chemical messengers. In the lateral hypothalamus, an important population uses a peptide that was called orexin because of its potent ability to evoke hunger, but other orexigenic neuropeptides include NPY as mentioned above, melanin-concentrating hormone (MCH) which is produced in the dorsomedial hypothalamus, and galanin, agouti-related peptide (AgRP) which is an endogenous antagonist of melanocortin receptors, and the opioid peptide beta-endorphin, all of which are produced in the arcuate nucleus. Anorexigenic neuropeptides include alpha-MSH, corticotropin releasing hormone (CRH), cocaine-and amphetamine regulated transcript (CART), neuromedin U, galanin, galanin-like peptide and oxytocin. In addition, many of the factors secreted from the periphery are also made in populations of nerve cells in the brain, and these populations are also involved in regulating appetite and metabolism. These include neurons in the arcuate nucleus that synthesise the orexigenic factor ghrelin, and the neurons in the hypothalamus and caudal brainstem that synthesize the anorexigenic factors cholecystokinin, GLP-1 and oxyntomodulin.