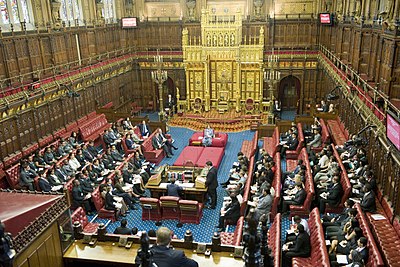 House of Lords chamber, Palace of Westminster, London, in 2011.

The History of the House of Lords encompasses the history of its nominal predecessors, the Anglo-Saxon Witan and the Norman Great Council, who were advisors to English monarchs. The current concept stems from the change that took place in 1341, when representatives of the towns and counties began to meet in their own chamber, started to deliberate separately from the King and his leading clergy and nobles, and became known as the House of Commons. Its subsequent history is dominated by a succession of transfers of its powers to the House of Commons, culminating in the Parliament Act of 1911 which effectively ended its ability to control the passage of legislation. It nevertheless retains a significant deliberative rôle in the Parliament of the United Kingdom. In the Middle Ages the majority of the House were Lords Spiritual, but this ended with Henry VIII's dissolution of the monasteries, after which the majority were hereditary peers until 1999, when most were removed, leading to its present composition.

The conduct of business

Government and opposition Peers sit on rows of benches facing each other in the magnificent House of Lords Chamber, on benches that are less closely spaced than those in the Commons chamber. Between them at one end is the Throne, and facing it at the other end are benches for the use of "cross-benchers", who are Peers with no party affiliation. Debates are chaired by the Lord Speaker, seated on the "woolsack"[9] in front of the Throne. The procedures used in debates are similar to those governing the conduct of business in the House of Commons, but the conduct of debates in the House of Lords is noticeably different. Business is conducted on a much more consensual basis, with no formal government control over the timetable. As in the House of Commons, the time allocated to each item is agreed in advance by government and opposition whips, but in the House of Lords the agreement is interpreted flexibly and may be altered in the course of a debate. Bills are given detailed scrutiny, often by Peers who have expertise or experience in the matters that they deal with.[10] Debates tend to involve lively exchanges, rather than the unrelated successions of prepared statements that tend to characterise Commons debates. Of the five House of Lords Committees, two provide Parliament with reports on the implications of domestic and European legislative proposals. The Lords Constitution Committee[11] investigates the constitutional implications of Public Bills (as well as conducting enquiries into constitutional issues), and the European Union Committee[12] with its seven sub-committees, reports on legislative proposals that are under consideration by the European Union.