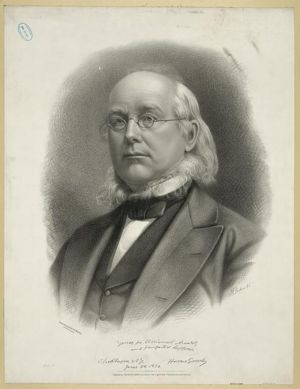 Horace Greeley (February 3, 1811 – November 29, 1872) was an American publisher and editor who revolutionized the news by creating a national market for his New York Tribune, a founder of the Republican party, reformer and presidential candidate. His New York Tribune was America's most influential newspaper from the 1840s to the 1870s and "established Greeley's reputation as the greatest editor of his day."[1] Greeley used it to promote the Whig Party and after 1854 the new Republican party, as well as antislavery and a host of reforms. Crusading against the corruption of Ulysses S. Grant's Republican administration, he was the presidential candidate in 1872 of the new Liberal Republican Party. Despite having the additional support of the Democratic Party he lost in a landslide.

He was born in Amherst, New Hampshire, the son of poor farmers Zaccheus and Mary Greeley. He declined a scholarship to Phillips Exeter Academy and left school at age 14; he apprenticed as a printer in Poultney, Vermont at The Northern Star the same paper wher George Jones served as an apprentice, moving to New York City in 1831. In 1834 he founded the weekly the New Yorker, which was mostly comprised of clippings from other magazines.

In 1836 Greeley married Mary Cheney Greeley; they spent little time together; Out of their seven children, only two lived.

In 1838 leading Whig politicians selected him to edit a major national campaign newspaper, the Jeffersonian, which reached 15,000 circulation. Whig leader William Seward found him, "rather unmindful of social usages, yet singularly clear, original, and decided, in his political views and theories" In 1840 he edited a major campaign newspaper, the Log Cabin which reached 90,000 subscribers nationwide, and helped elect William Henry Harrison president on the Whig ticket. In 1841 he merged his papers into the New York Tribune. It soon was a success as the leading Whig paper in the metropolis; its weekly edition reached tens of thousands of subscribers across the country. Greeley was editor of the Tribune for the rest of his life, using it as a platform for advocacy of all his causes. As historian Allan Nevins explains:

The Tribune set a new standard in American journalism by its combination of energy in news gathering with good taste, high moral standards, and intellectual appeal. Police reports, scandals, dubious medical advertisements, and flippant personalities were barred from its pages; the editorials were vigorous but usually temperate; the political news was the most exact in the city; book reviews and book-extracts were numerous; and as an inveterate lecturer Greeley gave generous space to lectures. The paper appealed to substantial and thoughtful people. [Nevins in Dictionary of American Biography (1931)]

Greeley prided himself in taking radical positions on all sorts of social issues; few readers followed his suggestions. Utopia fascinated him; influenced by Albert Brisbane he promoted Fourierism. His journal had Karl Marx (and Friedrich Engels too) as European correspondent in the early's 1850.[1] He promoted all sorts of agrarian reforms, including homestead laws.

Greeley supported liberal policies towards settlers; he memorably advised the ambitious to "Go West, young man." A champion of the working man, he attacked monopolies of all sorts and rejected land grants to railroads. Industry would make everyone rich, he insisted, as he promoted high tariffs. He supported vegetarianism, opposed liquor and paid serious attention to any ism anyone proposed. What made the ‘’Tribune’‘ such a success was the extensive news stories, very well written by brilliant reporters, together with feature articles by fine writers. He was an excellent judge of newsworthiness and quality of reporting. 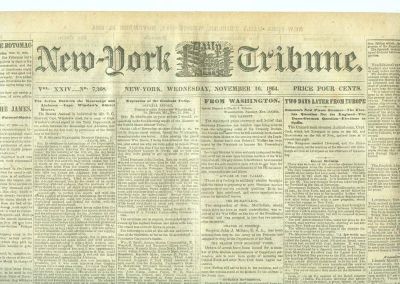 When the new Republican Party was founded in 1854, Greeley suggested the name (as an echo of the Jeffersonian Republicans) and made the Tribune its unofficial national organ. He fought slavery extension and the slave power on every page. On the eve of the Civil War circulation nationwide approached 300,000.

His editorials and news reports explaining the policies and candidates of the Republican Party were reprinted and discussed throughout the country. Many small newspapers relied heavily on the reporting and editorials of the Tribune. He served as Congressman for three months, 1848--1849, but failed in numerous other attempts to win elective office. In 1860 he supported the conservative ex-Whig Edward Bates of Missouri for president, an action that weakened Greeley's old ally Seward.[2]

Greeley made the Tribune the leading newspaper opposing the Slave Power, that is, what he considered the conspiracy by slave owners to seize control of the federal government and block the progress of liberty. In the secession crisis of 1861 he took a hard line against the Confederacy. Theoretically, he agreed, the South could declare independence; but in reality he said there was "a violent, unscrupulous, desperate minority, who have conspired to clutch power" –secession was an illegitimate conspiracy that had to be crushed by federal power. He took a Radical Republican position during the war, in opposition to Lincoln’s moderation. In the summer of 1862, he wrote a famous editorial entitled "The Prayer of Twenty Millions" demanding a more aggressive attack on the Confederacy and faster emancipation of the slaves. A month later he hailed Lincoln’s Emancipation Proclamation.

Although after 1860 he increasingly lost control of the Tribune’s operations, and wrote fewer editorials, in 1864 he expressed defeatism regarding Lincoln’s chances of reelection, an attitude that was echoed across the country when his editorials were reprinted. Oddly he also pursued a peace policy in 1863-64 that involved discussions with Copperheads and opened the possibility of a compromise with the Confederacy. Lincoln was aghast, but outsmarted Greeley by appointing him to a peace commission he knew the Confederates would repudiate.

Reconstruction and run for President

In Reconstruction he took an erratic course, mostly favoring the Radical Republicans and opposing president Andrew Johnson in 1865-66. His personal guarantee of bail for Jefferson Davis in 1867 stunned many of his long-time readers, half of whom canceled their subscriptions. After supporting Ulysses Grant in the 1868 election, Greeley broke with Grant and the Radicals and helped form a new Liberal Republican Party in 1872. To everyone’s astonishment, that new party nominated Greeley as their presidential candidate. Even more surprisingly, he was officially endorsed by the Democrats, whose party he had denounced for decades.

As a candidate, Greeley argued that the war was over, the Confederacy was destroyed, and slavery was dead — and that Reconstruction was a success, so it was time to pull Federal troops out of the South and let the people there run their own affairs. A weak campaigner, he was mercilessly ridiculed by the Republicans as a fool, an extremist, a turncoat, and a crazy man who could not be trusted. The most vicious attacks came in cartoons by Thomas Nast in Harper's Weekly. Greeley ultimately ran far behind the Democratic ticket, winning only 43% of the vote.

This crushing defeat was not Greeley's only misfortune in 1872. Greeley was among several high-profile investors who were defrauded by Philip Arnold in a notorious diamond and hoax. Meanwhile, as Greeley had been pursuing his political career, Whitelaw Reid, owner of the New York Herald, had gained control of the Tribune.