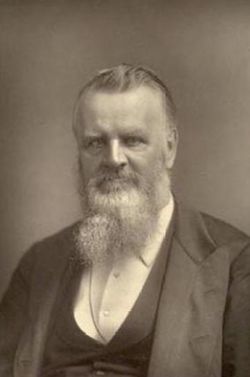 Henry Morley (1822-1894) was, among other things, a physician, the conductor of a school, one of the first Professors of English Literature, and a longtime writer and editor for Charles Dickens's magazine Household Words. He worked at Household Words from 1851 to its cessation in 1859, and published more articles in it than any other writer, Dickens included. In later years, he returned to his alma mater, King's College in London, where he was a Lecturer in English, and later to University College, where he was appointed Professor of English Language and Literature. A veritable Harold Bloom of his times, he edited over three hundred volumes of literary texts, which were issued in series as "Morley's Universal Library" and "Cassell's National Library," giving the English middle classes convenient compendia of the classics and forming a key moment in the canon formation of English literature as a whole.

Dickens was, as the "conductor" of Household Words, sometimes a stern taskmaster, making numerous revisions and additions to Morley's contributions, but Morley maintained good relations with him until Dickens's death in 1870. In later years, Morley was reluctant to lecture on Dickens, and when he spoke of him, he nearly broke down in tears. His assessment of Dickens was mixed, however; he remarked of him that "he had great genius, but not a trained and cultivated reason."