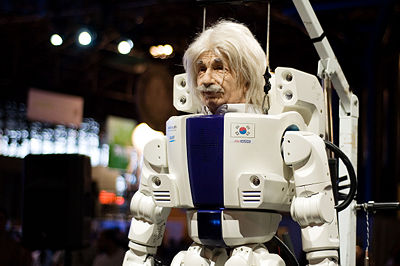 HUBO refers to the humanoid robots and the related technology demonstrators developed at the humanoid robotics lab (Hubo Lab) at Korea Advanced Institute of Science and Technology (KAIST). As with other humanoid projects, the main focus of HUBO's development has been on bipedal locomotion, such as walking, running, and traversing the stairs, which is the essential basis for testing and implementing theories on human-robot interaction and artificial intelligence. HUBO was officially unveiled to the public on January 6, 2005, after four years of research with three earlier prototypes. Its younger siblings are Albert HUBO and HUBO 2.[1][2]

The first HUBO (KHR-3) was developed by mechanical engineering professor Oh Junho and his Ph.D. student teams over the course of about 20 years. During much of this time, the technologies relevant to HUBO were acquired at a steady pace with contributions from within KAIST. While the KHR-3 HUBO was certainly not the most sophisticated robot of its time, it was noted as the first full-scale humanoid robot to be developed with less than $1,000,000 (more precisely, around $500,000 by the time of KHR-3's completion; in comparison, Honda is believed to have spent $300,000,000 on ASIMO between 1986 and 2000.)[3][4]

The first prototype was the KHR-0 (KAIST Humanoid Robot), consisting of two legs without an upper body. It was built in 2001 with the purpose of investigating the specifications of the actuators (devices that receive electric signals and perform mechanical actions) and the optimal design parameters of the humanoid robot.[5][6]

The second prototype, the KHR-1, was completed by January 2002. The KHR-1 was humanoid in form, but without the head and hand components that are nonessential for walking. Its purpose was to demonstrate autonomous walking that involves real-time motion control through sensory feedback. (This involves constant adjustments that are absent in playback walking from an offline learning process and partially adjusted walking.) It could walk at speeds up to 0.8 km/h and change its direction.[5][7][8][6]

The project was continued with the development of KHR-2 from 2003 to 2004. The KHR-2 was built as a complete humanoid and featured improved sensoring with the addition of CCD cameras, inertia sensors, and tilt sensors.[9] It was used as a platform for simulating vision-guided dynamic walking, in which the robot maintains focus on a moving red light.

Work on the KHR-3 HUBO was begun in September 2004. The internal components were covered with metallic grey plastic, and modifications were made to the joints and the skeleton for greater stiffness and minimal mechanical uncertainty. The KHR-3's physical specifications, such as height, weight, and the number of DOFs (degrees of freedom), were similar to Honda's ASIMO, which served as the benchmark for the project. In terms of AI and movements, HUBO fell short of the "next-gen ASIMO," which was unveiled three months later. While HUBO could only walk at 1.25 km/h, the ASIMO was capable of walking at 2.5 km/h and running at 3 km/h as well. The ASIMO was also capable of walking up and down stairs, which was a temporary shortcoming for HUBO needing further development. The unnerved KAIST researchers noted, however, that HUBO could play rock-paper-scissors, which was impossible for ASIMO since its fingers could not move independently of each other.[10][11][12]

The HUBO project drew considerable attention from abroad when the KHR-3 HUBO was unveiled in January 2005. According to an interview with Professor Oh,[4]

When KHR-2 was announced, Japanese scholars were surprised. Those Honda figures involved with ASIMO mostly knew what was going on, so I have yet to hear a direct response from them since HUBO was announced. I've just gotten faxes and emails from abroad, mostly asking if they could buy it or rent it. I also got an email from a Microsoft official who said he'd like to meet since they would like to do robot-related research. I've gotten responses from Taiwan and the United States praising HUBO.

The subsequent efforts on HUBO's development were international in scope, the first of which involved the Hanson Robotics in the creation of the Albert HUBO. Albert HUBO was a derived version of the KHR-3 HUBO, but with a distinctive head resembling Albert Einstein. The head, which was made by the Hanson Lab, featured a Frubber skin (often used in movie productions) and 35 joints underneath it to make realistic facial expressions. Like its predecessors, Albert HUBO contained 2 CCD cameras for vision recognition.[2]

Following the unveiling of Albert HUBO in November 2005, the Hubo lab released two technology demonstrators in the summer of 2007, which were HUBO FX-1, a bipedal moving chair, and HUBOWAY, like Segway. Putting HUBO ontop of HUBOWAY made headlines in the websphere as the first robot riding a Segway, which was to be included in HUBO's list of accomplishments.[13][14] 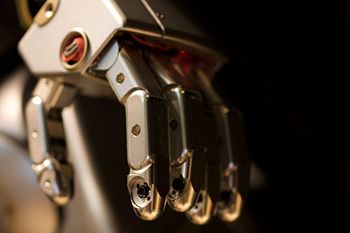 The logical step forward following the unveiling of HUBO and Albert HUBO was to demonstrate running, preferably with a stronger and lighter robot. Preliminary efforts in the running research began in 2005 when a task force under Professor Cho conducted hopping trials using the KHR-1 prototype. After collecting a year's worth of data, the research evolved from what was essentially on a one-dimensional movement (relative to the ground) to a two-dimensional stage investigating the forward movement patterns, and a test robot called KHR-Planar (informally referred to as 2D planar biped) was built for this purpose. The planar biped was placed on a running machine and fixed onto two sliding arms that stabilized it sideways, thereby mitigating disturbances from the third dimensional factor of its movements. A year and half later, full-scale trials were conducted on the modified KHR-2, which was running by March 2008 at 2 km/h. (It is possible that the world's second running robot after ASIMO was the KHR-2, although Toyota's Partner won the title as per official unveiling order in August 2009.)[15][16]

Around this time, works began on creating the next-gen HUBO, which involved researchers from Drexel University in the United States of America under a $5,000,000, 5-year PIRE program funded by the American National Science Foundation. The second-generation HUBO came to be known as HUBO 2 (also known as "KHR-4" and "Jaemi HUBO" for the U.S. version — "Jaemi" (재미) can mean "in the United States" in Chinese characters or "fun" in colloquial Korean). HUBO 2 was slimmer, about twenty-percent lighter, more durable, and slightly taller, thanks to its aluminium endoskeleton and polycarbonate frame. Its movements were more realistic, since its arms moved more quickly and naturally, and the legs could stretch to imitate human walking rather than bend in the traditional walking style of a humanoid robot. Straight-leg walking resulted in improved speeds of up to 1.4 km/h due to its more effective use of its legs. Virginia Tech was also involved in the PIRE program to develop a miniature version called the Mini HUBO, which would "serve as an affordable and open-ended research platform" based on HUBO 2.[17][18][19][20][21][22]

Due to its drastically different design and weight, HUBO 2 had to undergo further testing until it could run like the KHR-2. In November 2009, HUBO 2 officially became the world's third running humanoid robot, with a speed of 3.6 km/h (which is still much slower than the new ASIMO's 6 km/h by comparison). Compared to the KHR-2, HUBO 2 could take longer strides and was better at maintaining stability in case of a disturbance by slowing down to a stationary hop to regain balance.[16]

HUBO 2 was the first Korean humanoid robot to be exported. While Drexel obtained one Jaemi HUBO's under the PIRE program, it was reported that eight or more HUBO 2's were sold in December 2010 with an individual price tag of $3,400,000. The engineering departments at MIT, Pennsylvania, Purdue, Carnegie Mellon, USC, and Virginia Tech will each acquire a HUBO 2, and the Institute for Infocomm Research in Singapore made two or three such orders.[23] 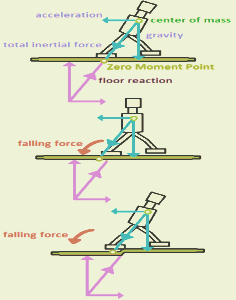 Central to HUBO's successful development was its focus on simpler and feasible design and movements. For HUBO to be light and efficient, its height was set similar to a child's, and the body was made with special materials (HUBO 2). Its autonomous design lacking external connections helps to both simulate realistic walking and reduce its exposure to outside factors that would increase its chances of error.[8][5]

All models were built with harmonic drives in order to avoid backlash in the gears and to achieve a light, compact design. The DOFs of the different axes in the joints of shoulders, waist, hips, and ankles were merged into intersections in order to attain a simple, closed-form solution (that is, comprised of well-known mathematical functions) of inverse kinematics (the computation of the robot's movements), when possible.[6][5]

For KHR-3 HUBO and Albert HUBO, as well as the prototypes, walking was exclusively based on a simple ZMP trajectory, involving bending of legs characteristic of walking by a human stalker. The benefits of this type of walking include lowered center of gravity for greater stability and constant height of the hips for simpler inverse kinematics of movements fixed on Zero Moment Points. The ZMP trajectory consists of points on the ground where the total moment of inertia of the active forces equals to zero when one leg is in contact. The trajectory was calculated with a simple model to form a repetitive pattern, in which the robot is always in touch with the ground, and the initial and end phases of its legs' movements are identical.[24]

HUBO 2, on the other hand, is able to walk like a human by "straight-leg walking," which is relatively faster than bent-leg walking because it reduces unnecessary movement and relieves burden on the knee components. Straight-leg walking was first demonstrated by Yu Ogura on WABIAN-2 with the addition of an extra DOF at the waist that caused it to sway to a certain degree. Unlike the Wabian-2, Jaemi HUBO clings to a natural set of DOFs and instead relies on a system of posture control consisting of body-balancing and vibration-reduction units.[24]

Biped walking speed is naturally restricted, however, due to the limited range of the hip joint (which makes the forward movement of the leg). HUBO 2 can move more quickly by running, which includes a flying phase when both its feet are off the ground. Running is not as structurally limited as walking because the robot continues to move forward midair even as its hip joint reverses motion. By rotating its upper body against the one-sided thrusting motion of its legs, the robot is able to maintain a periodic running pattern based on a trajectory of the angular momentum of its center of mass.[25]