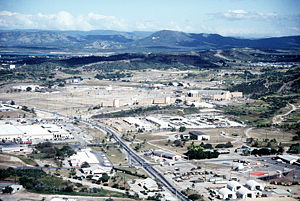 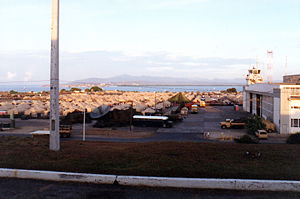 (PD) Photo: Gary Keen
Naval Station Guantanamo Bay with the Bay in the background, circa 2007.

The United States of America is entitled, by treaty, to maintain Naval Station Guantanamo Bay on a 20 square kilometer parcel of land on the Southern coast of Cuba. The Station historically was used for coaling and other logistics, but has been used as a facility for the involuntary detention of various categories of people, from Haitian refugees to persons accused of terrorism. It has also been used as a forward base for naval patrols in the Caribbean.

The United Statest seized Cuba, Puerto Rico, Guam, and the Philippines from Spain, during the Spanish American War.

When the USA allowed Cuba to become independent they signed a treaty with the new Government giving it a lease on the site.[1][2] The treaty allows the USA to use it as a Naval Base and Coaling Station, in return for rent of $4,000 per year. When Fidel Castro took power, fifty years ago, to show its opposition to the treaty, the Cuban Government stopped cashing the USA's rent checks.

During the later decades of the 20th Century the USA used the station to detain refugees from Cuba, Haiti and the Dominican Republic.

On January 11th, 2002 the USA opened Camp X-Ray, the first of several camps in the complex of Guantanamo detention camps that hold individuals that the George W. Bush Administration, without a general judicial or prisoner of war determination, deemed necessary to detain in the war on terror.[3]