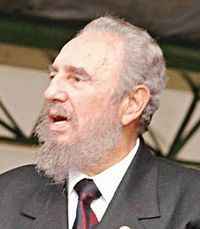 Fidel Castro (born Fidel Alejandro Castro Ruz; August 13, 1926 – November 25, 2016) was the president of Cuba, leading it from the 1959 revolution which toppled the previous regime of General Fulgencio Batista, until his resignation due to ill health on February 19, 2008.

Castro was born on his family's sugar plantation near Biran (which lies approximately 100km northwest of Guantanamo Bay) on 13th August, 1926. After graduating from the University of Havana in 1950, he became politically active and became involved in revolutionary politics in Colombia. Returning to Cuba, he ran for parliament in the general election of 1952, which was cancelled following Batista's coup. Together with his brother, Raúl, he led a revolt, beginning on 26th July, 1953, attacking the Moncada barracks in Santiago de Cuba. Both brothers were captured, being released in an amnesty after two years imprisonment. Following his release, he moved to Mexico, forming the 26th of July Movement. He returned to Cuba with a rebel force in December 1956, but the force was defeated. Castro and a small number of survivors, including Che Guevara, escaped to the mountains and began a three-year guerrilla campaign. In 1959, he led a 9,000 strong force into Havana and took power.