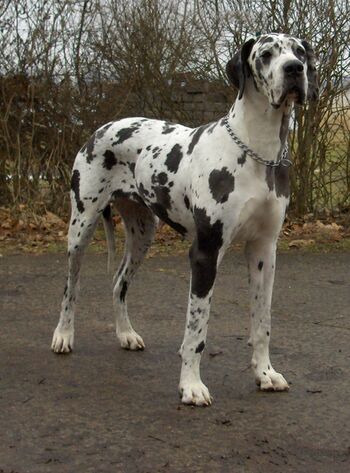 This majestic black and white Great Dane has the coat pattern called "harlequin".

Classed as a member of the 'working group' by the Kennel Club (Great Britain) and as a 'working dog' by the American Kennel Club, its name is derived from "the old French designation, grand Danois, meaning Big Danish"[1]. George Buffon, an eighteenth century French naturalist, used this name in describing the breed, and the English speaking world has since used its translation. Germans, however, use the name Deutsche Dogge (German Mastiff); the present day dog was developed by German breeders during the nineteenth century. The Great Dane was first displayed at a Hamburg dog show in 1862.[2]

Great Danes are of imposing size. The requirements differ slightly among kennel clubs, but the American Kennel Club standard calls for males to stand no less than 30 inches (76 cm) at the withers (the top of the shoulders) and females must be at least 28 inches (71 cm); they weigh 120 to 150 pounds (54 to 68 kg).

Great Danes are recognized in the following colors and patterns:

There are two acceptable fashions for a Great Dane's ears. They may be left natural, as the harlequin Dane's ears are shown in the photograph above right. Some breeders prefer to crop their puppies' ears. The ears will stay erect, but must be taped in position for the first several months of the pup's life in order to do so reliably.

A docked tail is a disqualification in this breed.

All Great Danes must exhibit sexual dimorphism, which means that males must look and females must look decidedly different. It must be easy to recognize a Dane as looking masculine or feminine.

Great Danes typically suffer difficulties associated with being very large such as "bloat", a painful gastric disorder, and hip dysplasia.

Genetic blindness and deafness have been associated with Great Danes lacking in pigment.