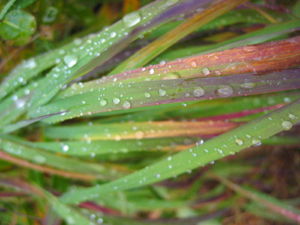 A close-up photograph of several blades of grass, to which a number of drops of water have adhered.

Grass is the common name given a whole variety of plants, that technically, should be restricted to monocotyledonous plants in the family Poaceae. These true grasses include most of the plants grown as cereals, for pasture, and for lawns. Grasslands, or prairies, are habitats that are marked by open expanses of grasses.

Grasses also include some more specialised crops such as the herb, lemongrass, as well as many ornamental plants, and some weeds. They also include plants often not considered to be grasses, such as bamboos.

Various types of grasses are often used in creation of gardens, both shade and sun, typically serving the purpose of a ground cover. In addition, some tall grasses, such as Miscanthus sinensis (common name of Zebra Grass) are used to serve a more plant-like role rather than a ground cover in garden design. 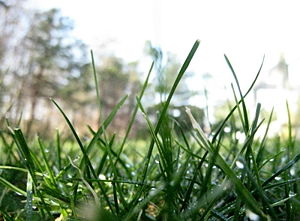 A large amount of property owners own land in addition to their own building, and rather than cover the land with plants, choose to use grass instead. A lawn can consist of one or more of the various types of grasses, and usually covers a moderately large portion of a given yard.

By definition, an ornamental plant is one grown for display purposes rather than it's commercial value. Of ornamental grasses, most are perennials, and as such the majority lose their color and begin to recede in the fall and winter months. However, bamboo, among others, is an exception to this rule, being an evergreen plant, and a select group of ornament grasses are also annuals.

Grasses in savannas and prairies

Prairies are a major natural habitat of grasses, typically a low elevation area with very few trees. In these atmospheres what are known as prairie grasses thrive, with the majority of the land covered by a tall, thick coat of the grass. This, when combined with characteristic large droughts, make fire a large threat to prairies.

Savannas, meanwhile, have more trees than prairie areas, though they are still considered to be widely spaced apart. In addition, both land areas tend to be categorized by grasses being the dominant plant.

Moorlands have a wide variety of grass types, many of them of little or no nutritional value to domesticated animals, in competition with many other types of plant. They are typically used for low-intensity pasture for specially bred animals, the food often being supplemented in winter. On some moors, it is the practice to burn heather from time to time to allow grass to grow.