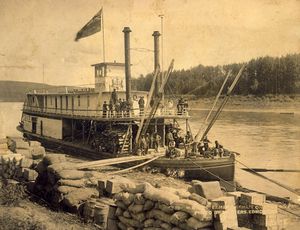 The SS Grahame was a wooden steamship built in Fort Chipewyan, Alberta, by the Hudson's Bay Company, in 1882, for service on the Athabaska River, lower Peace River, the Clearwater River, and the upper Slave River.[1][2] The Grahame was the first steam powered vessel in the region.[3] The engines were built in the south, and shipped overland. She was 135 ft (41.15 m) long, and could carry 140-150 tons of cargo.[4]

The vessel carried an official delegation from Canada's Federal government to negotiate treaty 8 with the First Nations in 1899.[4]