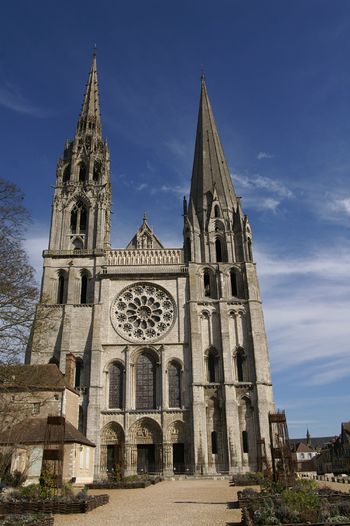 (CC [1]) Photo: David Merrett
The front facade of Chartres Cathedral in France was built in the 12th century and is an example of Gothic architecture.

Gothic architecture is a style of architecture that had its origins in the building of great cathedrals in France from the 12th to the mid-13th century and was known as the "French style" (opus Francigenum) before being appellated as 'gothic' during the Renaissance period.[1] It was introduced as the successor to the Romanesque architecture with the rebuilding of the choir and facade of the abbey in Saint-Denis between 1135 and 1144. The main feature of the gothic architecture (in the original context of cathedrals) is its transcendent depiction of light as symbol of divinity and heaven with the addition of large stained glass windows encased in a lean, skeletal construction — this contrasts with the theme of Last Judgment in Romanesque architecture which is characterized by thick wall and a darker interior.[2] Pillars and pointed arches were used as vertical support, and ribbed vault resulting from a continuous intersection two or three barrel vaults, as the upper structure, which converges its weight into focal points, to which flying buttresses were joined to contain its downward spreading force.[3]