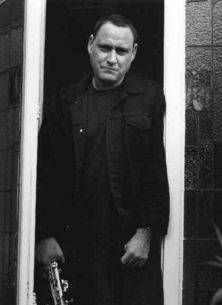 Gilad Atzmon is a jazz musician and composer, writer and Palestinian solidarity activist based in London, who grew up in Israel, and regards himself as a Hebrew-speaking Palestinian. He was born in Tel Aviv, Israel, on June 9, 1963, and completed obligatory military service, where his experiences brought about a major change in his thinking. After studying jazz and composition at the Rubin Academy of Music in Jerusalem, he embarked on a successful career in the music industry. In 1994, at the age of 30, he went to England and completed a Masters degree in philosophy, then decided to remain in the UK in self-imposed exile. Atzmon is now a British citizen, living with his family in London. He is an outspoken anti-Zionist, "arguing for a solution to the Israeli-Palestinian conflict based on equality and the Palestinian right of return. 'How is it that people who have suffered so much and for so long can inflict so much pain on the other?' he questions.[1]

Gilad's main instrument is the alto saxophone. He also plays soprano, tenor and baritone saxophones, and clarinet, sol, zurna and flute. His jazz style is bebop/hard bop, veering at times into free jazz.

Atzmon's long-standing band, the Orient House Ensemble (named after the Palestinian Authority headquarters in occupied East Jerusalem/the Old City), includes Frank Harrison on piano, Yaron Stavi on bass and Asaf Sirkis on drums. Steve Baxter in Jazz Views [2] described Gilad as "quite possibly the most exciting performer in the country" and wrote of the Orient House Ensemble: "Individually, you'd be hard put to find better practitioners of their respective arts, but collectively the rapport between them was a revelation…Despite the almost complete absence of discussion of what to play and how to play it, they negotiated the various changes of tempo and mood with an ease born of long association."

The more recent album Musik was described as "intensely beautiful" in a review of the band's performance at the 2004 London Jazz Festival, where Zoe Street wrote: "Now more than ever, The Orient House Ensemble has proved to be a band of noted political significance, producing thought-provoking music with a strong, blatant social slant, but so vibrant and melodic that I had to restrain myself…" [3].

Gilad's latest project as a political artist/musician is Artie Fishel, the "first artificial Zionist" [4]¸ his recently released CD of modern jazz fused with traditional klezmer music, and interlaced with commentary and interactive dialogue, featuring himself on saxophone, John Turville on keys and electronics, Yaron Stavi on bass and Asaf Sirkis on drums. Other artists include vocalist Guillermo Rozenthuler, Koby Israelite on vocals and accordion, and Ovidiu Fratila on violin.

The result, according to one review, is "much more than great music and cutting humour (reminiscent at times of the Marx Brothers and BBC Radio's “Goon Show.”) Ingeniously, by employing jazz as a metaphor, Gilad delivers a completely original and scathing indictment of Zionism and its creation, Israel. He accomplishes this by assuming the identity of Artie Fishel, a fictitious confused and out-spoken Jew who is also a very accomplished jazz and klezmer saxophonist/clarinetist and leader of the Promised Band." [5]

Gilad sums up Artie as follows: “Artie is indeed a funny bloke - he is far from being violent; in fact he loves peace, he loves his people, his people love him, but more than anything, he really loves himself. Artie is predominantly an entertainer. A Zionist Jew may see a reflection in Artie, others may see him as a glimpse into the Israeli and Zionist mindset, others may just laugh.” [6]

His work has explored the music of the Middle East, North Africa and Eastern Europe and he has collaborated, recorded and performed with musicians from all around the world [7], including the Palestinian singer, Reem Kelani, Tunisian singer and aud player Dhafer Youssef, and violinist Marcel Mamaliga, accordion player Romano Viazzani, and bassist Yaron Stavi, as well as the violinist and trumpet-violin player, Dumitru Ovidiu Fratila and Guillermo Rozenthuler (vocals). Since 2003, Atzmon has also collaborated with Robert Wyatt, who has been a great influence on Gilad's work.

Gilad is a long-standing member of the veteran punk-era band The Blockheads. Gilad joined them in 1998, when Ian Dury was still performing, and since has toured extensively with the band. As a member of the Blockheads, Gilad has also recorded with Shane McGowan, Robbie Williams, Sinead O'Connor and Paul McCartney.

Atzmon is on the creative panel of The Global Music Foundation [8], a non-profit organization formed in December 2004¸ which runs residential educational and performance workshops and events in different countries around the world.

In addition to being a jazz musician and political writer, Atzmon is also a novelist whose books are published in 22 languages. Robert Wyatt describes Atzmon as a 'seriously funny writer and the wittiest musician since Ronnie Scott'.[4] Atzmon's A Guide to the Perplexed was published in 2001, and was originally banned in Israel within weeks of publication, but later unbanned, and is now available in Hebrew. His second novel My One and Only Love [5] was published in 2005. Both novels explore the philosophical basis of the Jewish identity and its relationship to Zionism. Several reviews can be read at this link: [9].

Atzmon is an outspoken critic of the Israeli state. He supports the Right to Return for the millions of Palestinian refugees scattered across the Middle East and the globe and is an Honorary member of the Brussells Tribunal [10], and is also a signatory to the Palestinians are the Priority Petition: an open statement of commitment to the Palestinian Solidarity Cause [11], which states "We accept and believe in equality of all persons, regardless of their race, religion, political or other orientation. We believe that full and unconditional support of the Palestinian people is a condition sine qua non for activists to adopt, and we recognise that their attachment to their homeland is a fundamental and unalterable condition. To that end we advocate for one unified State with equal rights for all its citizens." [12].

A prolific writer of political articles, his work is regularly published at Counterpunch [13], Peacepalestine [14], Uruknet [15], Middle East On Line [16], Amin [17], The Information Clearing House [18], Dissident Voice [19] and Aljazeerah [20]. He has also written for The Guardian and the Daily Telegraph in the UK. A large archive of his political articles and articles about him can be found at the Palestine: Information with Provenance database [21].

Atzmon has triggered some controversy with his outspoken political statements. He responded to accusations of anti-Semitism in an article entitled "1001 Lies about Gilad Atzmon": "I am an anti-Zionist and oppose the Zionist mindset. I look at questions of Jewish identity and I do question the ties between a Jewish world view and Zionism. I refute totally that I am anti-Semite. In fact I also believe that the current concept of an anti-Semitism is meaningless. Once the Zionists had managed to establish their Jewish state, any form of anti-Jewish sentiments should be comprehended either as a private case of xenophobia or as a political retaliation to Israeli/Zionist atrocities. In other words, the title anti-Semite became an ‘empty signifier, i.e. a signifier with a vague, highly variable, unspecifiable or non-existent signified. It is an empty verbal utterance that exists merely to serve a political cause (very much like Blair’s WMD and Bush’s Axis of Evil). Because anti-Semite is an empty signifier, no one actually can be an anti-Semite and this includes me of course. In short, you are either a racist which I am not or have an ideological disagreement with Zionism, which I have." [22]

In October 2006 The Jewish Board of Deputies and Zionist Federation demanded the cancellation of the launch of Atzmon's Artie Fishel and the Promised Band at Pizza on the Park in London, but Artie was able to take the stage, with the performances going on to receive rave reviews [23].

In June 2005, Atzmon spoke at a bookshop of the Socialist Workers Party on "The Deconstruction of Zionist Identity". After being picketed , the SWP, defended their invitation and published a statement from him stating he was neither a Holocaust denier nor a racist.

In December 2006, Atzmon joined Courtney Pine, Rodney P and Skitz, and Sam Beste for another SWP event, the Cultures of Resistance, a massive benefit concert for the Socialist Workers Appeal. Video clips of the concert available are available at this link [24].

Atzmon confronted the ongoing attacks on him in an article entitled "Think Tribal, Speak Universal" [25]: "I have managed to unite them all: Right, Left and Centre....They all repeat exactly the same misquotes. They all hate Gilad Atzmon. ...When it comes down to it, I’m not the canonical enemy; I am a jazz musician and author. I am not a politician, nor am I a member of any party. I do not present or support any political agenda. I have never been involved in any act of violence (not even as an Israeli soldier) nor have I ever called for violence. I am what some may call an “independent critical thinker”. It is my personal understanding that I choose to share with my readers and listeners. I express my very own reading into events and some speculations regarding the notion of identity. I write about things that I find while looking into myself. This is indeed very dangerous for people who try to promote some collective dogmatic and ethnic tribalism. It is apparently the individual and critical thinker who endangers any form of ideological dogmatism (in general) and Jewish collectivism (in particular)."