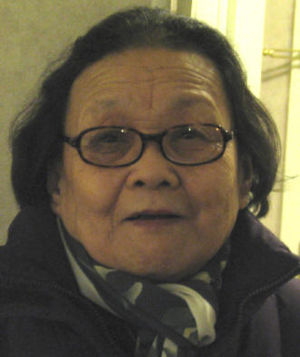 Dr. Gao Yaojie
This is a Chinese name; the family name is Gao

Dr. Gao Yaojie (高耀潔; born 1927) is a Chinese gynecologist, academic, and AIDS activist in Zhengzhou, Henan province, China. Gao has been honored for her work by the United Nations and Western organizations, and has spent time under house arrest.

Gao was born in Cao County, Shandong Province. A retired professor at the Henan College of Traditional Chinese Medicine, Dr. Gao is a medical doctor who specialized in ovarian gynecology [1], and in particular gynecological tumors.

Henan was the site of the Bloodhead scandal which resulted in rapid spread of the HIV virus during the 1990s among the impoverished rural population who sold blood at unsanitary collection centers. Dr. Gao is well known in China and worldwide for her AIDS prevention work in during the HIV epidemic in Henan, and for advocating much greater attention to people suffering from AIDS and children orphaned by AIDS. [2]

Gao is well known for her writings and visits to Henan villages to educate people on HIV/AIDS prevention and for her work on behalf of the many children orphaned by the AIDS epidemic in Henan Province, home to 100 million people. In 1996 Dr. Gao Yaojie started doing AIDS prevention work and treating people afflicted with AIDS in Henan's villages at her own expense. She visited over 100 Henan villages and treated over 1000 people. She self published her book "Prevention of AIDS and Sexually Transmitted Diseases" and distributed 300,000 copies of the book. Her newsletter "Knowledge for HIV Prevention" went to 15 issues and a total printing of 530,000 copies. She used the $20,000 Jonathan Mann Award and $10,000 in contribution to reprint her book. Since 2000, most of her efforts has been focused on helping AIDS orphans in Henan's villages.[3]

In 2001 she was awarded the Jonathan Mann Award for Health and Human Rights, [4] In 2003 she was awarded the Ramon Magsaysay Award for Public Service in Manila, Philippines. [1] [5] In both instances she was denied permission to travel outside China to accept the awards. [6] In 2003 she was designated on of the “Ten People Who Touched China in 2003” by China Central Television.

Slated to be awarded the "Global Leadership Award, Women Changing Our World" by the Vital Voices Global Partnership along with 3 other women from India, Guatemala, and Sudan at the John F. Kennedy Center for the Performing Arts on March 14, 2007, Dr Gao was reported in February, 2007 to have been held in house arrest and unable to travel. [2] She had been pressured by local official to sign a statement that she is "unable to travel due to poor health." [6] Vital Voices Global Partnership advocates women playing active leadership roles in society. Hillary Rodham Clinton is a prominent participant in the organization. [7] A visit to her apartment while under she was still under house arrest by Henan Province Vice Party Secretary Chen Quanguo，Henan Vice Governor Wang Jumei, and Henan Province Communist Party Organization Department head Ye Dongsong presented her flowers and best wishes from the Henan Party and Government for the Chinese New Year [8] appeared in the Henan Daily and other Chinese media. On February 16, 2007, bowing to international pressure, the government gave her permission to travel to the United States to receive the award. [9]

The house arrest of Dr. Gao was part of a continuing pattern of harassment, especially in Henan Province, of grassroots AIDS activists in China. In 2006 Wan Yanhai, another prominent activist, was detained and prevented from holding a AIDS conference in Beijing. Dr. Gao's blog, which she still maintains, has become what Dr. Gao's calls a "battleground" between her supporters and detractors. Dr. Gao in her blog entry of February 11 denounces a hacking saboteur of her blog and notes that one visitor left a message that people were being paid 50 RMB each to leave negative comments. Gao writes that the attacks began after she began describing many cases of people who got HIV through blood transfusions in order to show a serious problem of HIV transmission by blood transfusion continues in Henan Province.[10]