In mathematics, exponential growth (or geometric growth) occurs when the growth rate of a function is always proportional to the function's current size. Such growth is said to follow an exponential law (but see also Malthusian growth model). This implies for any exponentially growing quantity, the larger the quantity gets, the faster it grows. But it also implies that the relationship between the size of the dependent variable and its rate of growth is governed by a strict law, of the simplest kind: direct proportion. It is proved in calculus that this law requires that the quantity is given by the exponential function, if we use the correct time scale. This explains the name.

But the general principle behind exponential growth is that the larger a number gets, the faster it grows. Any exponentially growing number will eventually grow larger than any other number which grows at only a constant rate for the same amount of time (and will also grow larger than any function which grows only subexponentially). This is demonstrated by the classic riddle in which a child is offered two choices for an increasing weekly allowance: the first option begins at 1 cent and doubles each week, while the second option begins at $1 and increases by $1 each week. Although the second option, growing at a constant rate of $1/week, pays more in the short run, the first option eventually grows much larger: 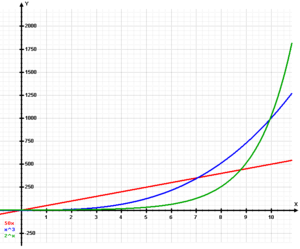 From the graph, it becomes evident how an exponential growth surpasses both linear and cubic growths

The red line represents 50x, similar to option 2 in the above example, except increasing by 50 a week instead of 1. Its value is largest until x gets around 7. The blue line represents the polynomial x3. Polynomials grow subexponentially, since the exponent (3 in this case) stays constant while the base (x) changes. This function is larger than the other two when x is between about 7 and 9. Then the exponential function 2x (in green) takes over and becomes larger than the other two functions for all x greater than about 10.

Anything that grows by the same percentage every year (or every month, day, hour etc.) is growing exponentially. For example, if the average number of offspring of each individual (or couple) in a population remains constant, the rate of growth is proportional to the number of individuals. Such an exponentially growing population grows three times as fast when there are six million individuals as it does when there are two million. Bank accounts with fixed-rate compound interest grow exponentially provided there are no deposits, withdrawals or service charges. Mathematically, the bank account balance for an account starting with s dollars, earning an annual interest rate r and left untouched for n years can be calculated as

can work as the value k in the formula kn given earlier.

Let x be a quantity growing exponentially with respect to time t. By definition, the rate of change dx/dt obeys the differential equation:

where k ≠ 0 is the constant of proportionality (the average number of offspring per individual in the case of the population). (See logistic function for a simple correction of this growth model where k is not constant). The solution to this equation is the exponential function

-- hence the name exponential growth ('e' being a mathematical constant). The constant

is the initial size of the population.

In the above differential equation, if k < 0, then the quantity experiences exponential decay.

The law of exponential growth can be written in different but mathematically equivalent forms, by using a different base. The most common forms are the following:

is the e-folding time; and T is the doubling time. Indicating one of these four equivalent quantities automatically permits calculating the three others, which are connected by the following equation (which can be derived by taking the natural logarithm of the above):

A popular approximated method for calculating the doubling time from the growth rate is the rule of 70, i.e.

As discussed above, an important point about exponential growth is that even when it seems slow on the short run, it becomes impressively fast on the long run, with the initial quantity doubling at the doubling time, then doubling again and again. For instance, a population growth rate of 2% per year may seem small, but it actually implies doubling after 35 years, doubling again after another 35 years (i.e. becoming 4 times the initial population), etc. This implies that both the observed quantity and its time derivative will become several orders of magnitude larger than what was initially meant by the person who conceived the growth model. Because of this, some effects not initially taken into account will distort the growth law, usually moderating it as for instance in the logistic law. Exponential growth of a quantity placed in the real world (i.e. not in the abstract world of mathematics) is a model valid for a temporary period of time only.

For this reason, some people challenge the exponential growth model on the ground that it is valid for the short term only, i.e. nothing can grow indefinitely. For instance, a population in a closed environment cannot continue growing if it eats up all the available food and resources; industry cannot continue pumping carbon from the underground into the atmosphere beyond the limits connected with oil reservoirs and the consequences of climate change; etc. Problems of this kind exist for every mathematical representation of the real world, but are specially felt for exponential growth, since with this model growth accelerates as variables increase in a positive feedback, to a point were human response time to inconvenients can be insufficient (on these points, see also the Exponential stories below).

Exponential increases appear in each level of a starting member's downline as each subsequent member recruits more people.