In chemistry, an electric dipole is a charge distribution consisting of two electric point charges of opposite sign and equal magnitude.

Usually it is added to this definition that the distance r between the two point charges is small—if this is the case the dipole is a point dipole. Small is a relative concept and requires further specification. In general one is interested in the electric potential field due to the dipolar charge distribution at a distance R from the midpoint of the dipole. If it holds that r << R then, seen from the distance R, the dipolar charge distribution can be considered to be a point dipole.

In physics, one meets the following related, but different, definition: an electric dipole moment (often briefly "dipole") of an electrostatic charge distribution ρ(r) is its first moment,

In this definition a dipole is a vector depending on the characteristics of the charge distribution.

Combining the two definitions, one considers two point charges: q1 at position r1 and q2 at position r2. The charge distribution is written in terms of Dirac delta functions

where the charges are of opposite sign and equal magnitude. The first moment of this charge distribution is

In chemistry sizes of molecular dipole moments are often quoted to indicate the amount of charge separation in a molecule. Usually chemists are only interested in absolute values, a large dipole indicates a highly polar molecule (much separation of charge), whereas non-polar molecules have negligible dipoles. In the rare cases that the sign of a dipole plays a role in chemistry, most (organic) chemists use a convention that is opposite to the convention just discussed: they let the dipole point from a positively charged region in the molecule to a negatively charged region. 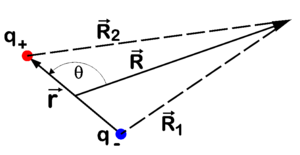 where R is the length of R, the dot indicates the dot product between μ and R, and ε0 is the electric constant (vacuum permittivity).

The potential Vdip(R) is a special term in a general expansion; see for the general form the article on the multipole expansion of an electric field.

The potential field of a point dipole can be determined fairly easily, see figure 1 for the symbols. In the equations we indicate vectors with bold letters, omitting the arrows on top. The length of a vector is indicated with the corresponding symbol in italics. Write 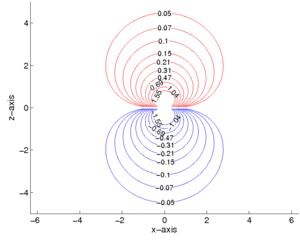 The Coulomb potential at the point R is the sum of the potentials due to the two charges, which are of equal magnitude q and of opposite sign,

Dipole in an electric field

where we took the origin 0 somewhere within ρ. The electric field F is a homogeneous vector field. With V(0) as the zero of potential, the interaction becomes

Here we meet again the first moment μ of the charge distribution ρ(r), the dipole moment of ρ(r). If linearizing V is too drastic an approximation, more terms in the Taylor expansion may be included, this leads to a multipole expansion of the potential V(r).