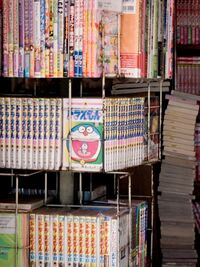 Doraemon is a Japanese manga and anime series. The author of the manga is Fujiko Fujio.

The manga series depicts the story of Doraemon, a robot cat dispatched from the future to present. It was sent to help Nobita Nobi, an elementary school student who does not do too well in school and is often made fun of by his peers, by one of his future descendants.[1]

Doraemon owns many future tools and uses them when aiding Nobita. However, in the end of most episodes, Nobita usually misuses the tools and causes mischievous results.