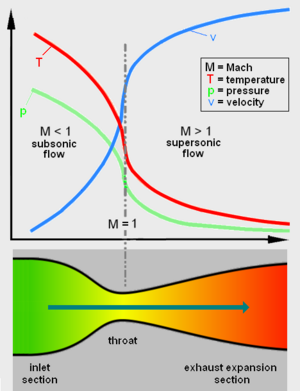 (PD) Diagram: Milton Beychok
Diagram of the gas flow through a de Laval nozzle used to produce supersonic velocity of the exhaust gases from a rocket engine.

A de Laval nozzle (also convergent-divergent nozzle) is a tube that is pinched in the middle, making a carefully balanced, axially-symmetric hourglass shape. It is used to accelerate a hot, pressurized gas flowing through it to a supersonic [1] speed so as to maximize the amount of the hot inlet gas heat energy that is converted into exhaust gas kinetic energy.

A de Laval nozzle closely resembles a venturi tube and gas flows through a de Laval are subject to the same Venturi effect as produced by a venturi tube.

The de Lava nozzle is widely used in some types of steam turbine and it is an essential part of modern rocket engines as well as being used in supersonic jet engines.

The nozzle was developed by Swedish inventor Gustaf de Laval in 1888 for use on an impulse steam turbine.[2][3][4]

A de Laval nozzle was used in the first liquid-fuel rocket engine designed and launched in 1926 by Robert Goddard, an American physicist and rocket pioneer.[5] It is now used in nearly all modern rocket engines propelled by the hot gases produced by combustion of a fuel.

The conceptual analysis of gas flow through a de Laval nozzle involves a number of assumptions:

The linear velocity of a subsonic [1] gas will increase if the pipe or other conduit carrying it narrows because the mass flow rate is constant. At subsonic linear velocities, the gas is compressible and sound (which is a longitudinal pressure wave) will propagate through it. Under certain conditions, the gas velocity at the "throat" of a de Laval nozzle, where the cross-sectional area is at a minimum, becomes sonic [1] (denoted as having a Mach number = 1.0) under certain conditions[6] and is commonly referred to as choked flow. As the nozzle's cross-sectional area increases in the divergent section, the linear velocity of the gas flow becomes supersonic [1] as the gas expands and sound waves can no longer propagate backwards through the gas.

If the gas flow through a de Laval nozzle is not at choked flow conditions, supersonic flow will not occur in the gas expansion section downstream of the nozzle throat and the de Laval nozzle will essentially act as a venturi tube.

Even when the gas flow through the throat of the de Laval nozzle is choked, the exhaust gas pressure at the exit of the expansion (diverging) part of the nozzle must not be too low. Since the external ambient pressure cannot travel upstream against the supersonic exhaust flow, the exit pressure can be significantly below the external ambient pressure into which the gas exhausts. However, if the exit pressure is too far below the ambient pressure, then the exhaust gas flow will cease to be supersonic, or the flow will separate within the expansion portion of the nozzle, forming an unstable jet that may "flop" around within the nozzle, possibly damaging it.

In practice, the external ambient pressure must be no higher than approximately 2-3 times the pressure of the supersonic exhaust gas at the nozzle exit.

As the gas enters a nozzle, it is traveling at subsonic velocities. As the throat contracts down the gas is forced to accelerate until at the nozzle throat, where the cross-sectional area is the smallest, the linear velocity becomes sonic. From the throat the cross-sectional area then increases, the gas expands and the linear velocity becomes progressively more supersonic.

The linear velocity of the exiting exhaust gases can be calculated using the following equation:[7][8][9]

Some typical values of the exhaust gas velocity ve for rocket engines burning various propellants are:

As a note of interest, ve is sometimes referred to as the ideal exhaust gas velocity because it based on the assumption that the exhaust gas behaves as an ideal gas.

Astrophysicists have found that pipes or other conduits with the flow pattern of a De Laval nozzle have analogous phenomena in the interstellar medium. Similar flow properties have been ascribed to jet streams within astrophysics.[10]