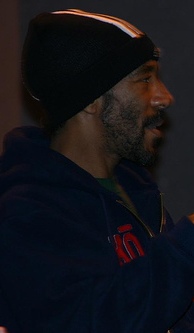 Danny John-Jules attended Rutherford comprehensive school in Marylebone from 1972 to 1977. Before his television and film work, he was a dancer in many productions at West End theatres. He was a member of the original cast of Starlight Express, playing a boxcar called Rocky I.

Danny John-Jules is best known for playing the Cat and that character's alter ego Duane Dibbley in the British comedy series Red Dwarf. He originally won the part by turning up half an hour late for his audition, dressed in his father's old zoot suit. Jules was unaware that he was late and thus did not appear at all concerned with his tardiness; the producers immediately decided he was cool enough to be 'the Cat'.

In 1993, he released a song from Red Dwarf, 'Tongue Tied', as a single, which got into the top 20 of the UK Singles Chart. He reprised his role alongside the other regulars for a 2009 three-part special, Back to Earth.

John-Jules has played the parts of Barrington in Maid Marian and Her Merry Men and Milton Wordsworth, the original presenter of The Story Makers.

Since 1999, he has had several guest appearances as in shows such as Comedy Connections documentary, Casualty, RI:SE and Night Fever.

In 1995, John-Jules starred in a pilot for a show which was to be called Danny John-Jules Killer Duels. Each week he was to examine famous one-on-one battles from history and then, with a team of experts, decide which of the opponents would have won had they played a game of chess, irrespective of who won the actual duel.

In film, he supplied the voice for two characters in Labyrinth, then appeared in the 1986 version of Little Shop of Horrors, Lock, Stock and Two Smoking Barrels, and Blade II. He also appeared uncredited in the 1979 British film Scum, playing a look-out during a fight scene. He is also involved in The Tournament produced by Shakabuku Films.

Danny John-Jules also provided his voice for the character of Gex in the UK and European release of Gex 3: Deep Cover Gecko.