The origins of agriculture and domesticated crops are intertwined, and the change from a hunter-gatherer mode to tillage, sowing and harvesting was one of the major technologcal innovations of humankind. There is good evidence that this occurred some 10,000 years ago in several different locations, and involved the domestication of wild-relatives of the major crops (see History of Agriculture). 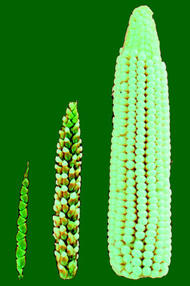 Domestication involves changes in the genetic makeup and morphological appearance of plants (and animals). These changes occur because people select the variations of a wild plant that best suit their needs. If the desired features can be passed to offspring, over generations of planting and harvesting, the strains of plants grown change. Despite the fact that these domesticated varieties of plants are preferred over their original forebears, the wild-relatives of crop plants continue to be an important resource. Reserves of wild plants offer a pool of genetic diversity. Traits of plants that might have been lost in domestication, sometimes become crucial for protection of domesticated crops from stress and disease (see Plant breeding). Maintaining wild strains for their gene pool helps ensure food security. Knowledge of crop origins is thus of considerable practical importance, even when these original strains are no longer harvested as crops.

Development today of new crops (such as perennial alternatives of currently used annual staples) has potential value in helping meet serious current agricultural challenges such as the need for water use efficiency, better management of land salinization, and soil conservation.

Tracing the ancestors of crops

A Swiss botanist, Alphonse de Candolle started studies of the origins of crops in 1885, and proposed two approaches to answering these questions. The first is identification of the geographical distribution of wild-relatives of modern crops, based on careful botanical descriptions and tests for cross-pollination between candidate ancestors and the crop in question.

Second, archaeological studies often provide clues on how and when a transition from hunter-gatherer existence to agriculture occurred.


The earliest origins of major crops based on carbon-14 dating, date back around 10,000 years, just after the end of the last ice age. This allows the geographical regions in which crop domestication took place to be identified.

Six independent centers of crop origin can be nominated [1]):

Wheat domestication in the Middle East

Wheat is a term for a number of related cultivated cereals in the genus Triticum [2] that originated from wild-grasses some 10,000 years ago in the general region of current day Iraq.

The earliest domesticated wheats were einkorn wheat (T. monococcum) which is diploid (2 sets of chromosomes) and emmer (a tetraploid) .

Recent findings narrow the first domestication of wheat down to a small region of southeastern Turkey.[3]

Genetic analysis of wild einkorn wheat indicates that this wheat was first domesticated in the Karacadag Mountains in southeastern Turkey. Dated archeological remains of einkorn wheat in settlement sites near this region, including those at Abu Hureyra provides confirmation for the domestication of einkorn near the Karacadag Mountain Range. The earliest carbon-14 date for the einkorn wheat remains at Abu Hureyra is 7800 to 7500 years BCE.[4] Recent genetic and archeological discoveries indicate that emmer wheat and durum (hard pasta wheat) originated from this same Karacadag region of southeastern Turkey. Remains of harvested emmer from several sites near the Karacadag Range have been dated to between 8,800 BCE and 8,400 BCE, that is, in the Neolithic period.[5]

Cultivation and repeated harvesting and sowing of the grains of wild grasses led to the creation of domestic strains, as mutant forms ('sports') of wheat were preferentially chosen by farmers. In domesticated wheat, grains are larger, and the seeds (spikelets) remain attached to the ear by a toughened rachis during harvesting. In wild strains, a more fragile rachis allows the ear to easily shatter and disperse the spikelets.[6] Selection for these traits by farmers might not have been deliberately intended, but might simply have been because these traits made gathering the seeds easier; nevertheless such 'incidental' selection was an important part of crop domestication. As the traits that improve wheat as a food source also involve the loss of the plant's natural seed dispersal mechanisms, highly domesticated strains of wheat cannot survive in the wild.

Cultivation of wheat subsequently to spread beyond the Fertile Crescent after about 8,000 BCE. Jared Diamond traces the spread of cultivated emmer wheat starting in the Fertile Crescent about 8500 BCE, reaching Greece, Cyprus and India by 6500 BCE, Egypt shortly after 6000 BCE, and Germany and Spain by 5000 BCE [7].

Hexaploid (AABBDD) wheats first evolved in farmers' fields when wheat cultivation moved to regions south of the Caspian sea. Either emmer or durum wheat hybridized with yet another wild diploid grass in that region (Aegilops tauschii (DD)) to make the hexaploid (6 chromosomes, AABBDD) wheats, spelt and bread wheat.[8]

Maize and bean domestication in the Americas

New crops by hybridization and polyploidy