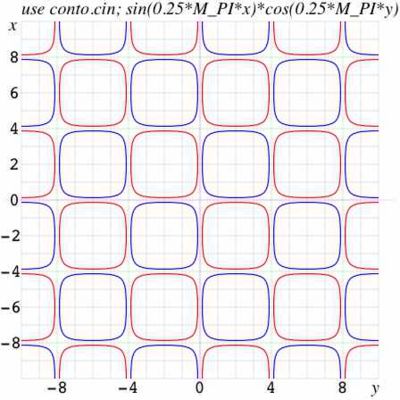 is plotted in the range

are shown with red lines. Levels

are shown with blue lines.

Contour plot is kind of graphical image that shows some function

is constant, called level. Such lines are called isolines. If many isolines are shown, their density indicate the slop of the function.

One example of the contour plot is shown in Figure 1. Function

is plotted in the range

are shown with red lines. Levels

are shown with blue lines.

An isoline actually is graphic of solution of equation (1). One of variables (for example,

Countour plots are used to map some surface: relief of the Earth surface at a geographic map, real and imaginary part of a function of complex variable - any bidimensional distribution. 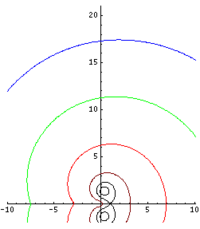 -plane, made with Mathematica.

Programming languages of high level (Matlab, Mathematica, Maple) offer the special procedures (operators, "functions") for contour plot and implicit plot. These procedures allow quick programming of contour plots of simple functions (see, for ex., Fig.2 and its source), but may be slow in execution and sometimes do not provide a good compromise between quality of the image and size of the file. Customised codes (see examples below) may be more efficient, but require some effort for programming.

Use of Contour plot

The following figures were generated using the contour plot: