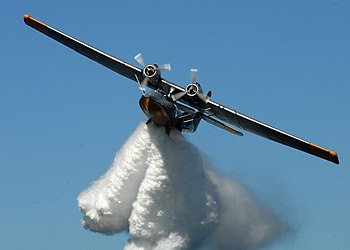 This US Navy PBY-6A Catalina has been converted into a fire-fighting aircraft.

The Consolidated PBY Catalina was an amphibious aircraft, introduced during the 1930s, that saw extensive use during World War 2.[1]

While they could be used as bombers, that role was generally better filled by faster aircraft designed as bombers. PBYs were used for long range patrols, and for landing at sea, to rescue downed flyers.

After the war some PBY were converted to firefighting.[1]