Condensate polishing is a unique application of ion exchange resins that removes suspended and dissolved impurities[6] from the condensate. It is essential for the very stringent quality required of high-pressure steam generation feedwater. 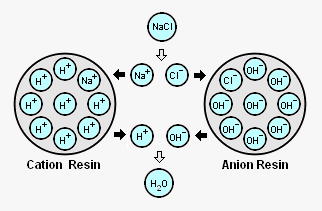 Ion exchange is a reversible chemical reaction wherein ions (atoms or molecules that have lost or gained an electron and thus acquired an electrical charge) present in a solution are exchanged for a similarly charged ion attached to an immobile solid particle of ion exchange material.[7][8]

That illustrates how ion exchange material removes dissolved substances from steam condensate or any other solution. The process is sometimes referred to as demineralization (DM) or deionization (DI).

The ion exchange materials can be naturally occurring zeolites or synthetically produced polymeric resins. The synthetic resins are the most commonly used today because their characteristics can be tailored to specific applications. 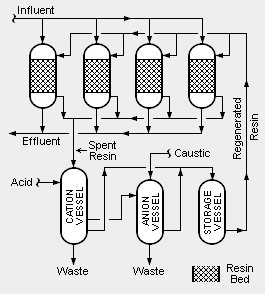 In order to account for fluctuations in the amount of condensate to be treated and to provide continuous operation over long periods time, multiple vessels are used. For example, as shown in the adjacent diagram, there may be four onstream vessels containing beds of mixed resins. At any given time, three of the vessels are in onstream operation and one vessel is being regenerated. Each of the four vessels may be sized to handle 50 percent of the normal, average flow of condensate so that the three onstream vessels are capable of handling 150 percent of the average flow.

The incoming influent steam condensate is split into three parallel streams, with each stream flowing through one of the three onstream vessels. The treated outgoing effluent is recycled for use as feedwater to the steam generator(s).

The system also includes three vessels used for regenerating spent resins. One uses acid to regenerate spent cation resin, another uses caustic to regenerate spent anion resin and the third is used for the intermediate storage of regenerated resin. The regeneration section produces wastewater (referred to as brine) that contains the reconstituted contaminants which were removed from the condensate feed water. Disposal of the waste brine can be a problem.

It is very important that resins being regenerated are first separated into cation resin and anion resin. There are many different methods for accomplishing that separation onsite. Alternatively, the separation may be done by offsite contractors.[3][4].

References to ion exchange have been attributed to the Old Testament scribes and later to Aristotle.[11] However, the first scientific descriptions have been credited to two English soil scientists, H.S. Thompson and J.T. Way who published their observations in 1850 about 'base' or cation exchange between calcium and ammonium ions on some types of soil.[12][13] In 1858, a German chemist, H. Eichhorn, proved that the ion exchange process in soil was a reversible one.[14][15][16]

Two other Germans, J. Lemberg in 1870 and later G. Wiegner in 1876, identified the soil material responsible for the observations of Thompson and Way as being clays, glauconites, zeolites and humic acids.[17] That led to the use of such materials in water softening processes and attempts to synthesize materials with similar properties. In 1896, natural zeolites were used for the first time in the sugar industry to replace sodium and potassium ions (Na+ and K+) by calcium and magnesium ions (Ca2+ and Mg2+) ions in sugar syrups.[15]

The first synthetic industrial ion exchange material was developed by two more Germans, F. Harm and A. Rümpler, in 1903.[17] In 1905, yet another German, R. Gans, developed a commercial process for water softening water using sodium aluminosilicate which he called zeolites.[14]

A spectacular evolution began in 1935 with the discovery by two English chemists, B.A. Adams and E.l. Holmes, that crushed phonograph records exhibited ion exchange properties. Their work led them to synthesis of organic ion exchange resins with much better properties than any of the previous materials.[13][14][17] New synthetic resins were developed during World War II by the former I.G. Farbenindustrie in German. After the war, companies in the United States and in England also developed improved synthetic resins. Today, nearly all industrial and laboratory applications of ion exchange are based on synthetic resins.