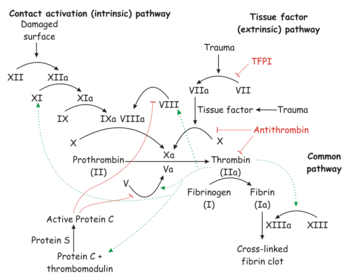 Coagulation is "the process of the interaction of blood coagulation factors that results in an insoluble fibrin clot."[1]

Coagulation, along with platelet activation, leads to hemostasis.

Details and figures depicting the coagulation pathways are available online at the National Library of Medicine.[3]

All coagulation factors are produced in the liver except for von Willebrand's factor which is made in blood vessels and the spleen.[4]

The synthesis of coagulation factors II, VII, IX, and X and proteins C and S is dependent on vitamin K.[5] The half-lives of the cofactors range from five to seven hours for factor VII to 3 days for factor II (prothrombin).

Deficiency of Factor I (fibrinogen) may be inherited (afibrinogenemia) or acquired.

Deficiency of Factor II (prothrombin) leads to hypoprothrombinemia. The defiency may be acquired in due to prothrombin antibodies.[7]

Hemophilia, an usually genetic deficiency of certain factors necessary for coagulation, is of two major types:[9]

Factor X deficiency is a "blood coagulation disorder usually inherited as an autosomal recessive trait, though it can be acquired. It is characterized by defective activity in both the intrinsic and extrinsic pathways, impaired thromboplastin time, and impaired prothrombin consumption."[10]

Multiple factor deficiencies may be present in disease, or produced deliberately in treating diseases of the coagulation system.

Surprisingly, patients with liver failure are not at reduced risk of embolism and thrombosis. The risk of thrombosis and embolism among patients with liver failure correlates with the partial thromboplastin time and not the International Normalized Ratio.[5] Fatal pulmonary embolism has been reported, and may be due to reduction in synthesis by the liver of protein C, protein S, and antithrombin III and compared to reduction in coagulation factors.[11]

Anticoagulants are medications use to prevent coagulation and embolism and thrombosis.

Warfarin therapy reduces the vitamin K dependent cofactors II, VII, IX, and X and the vitamin K dependent Protein C. The level of factor II is thought to most influence coagulation.[2][14] The levels of factor VII and Protein C fall the fastest after warfarin is started.[14] With the exception of Factor IX, these factors are from either the extrinsic pathway or the final common pathway.

Thrombolytic drugs are used to dissolve harmful clots caused either by a disorder of coagulation, or of an internal traumatic event, such as a myocardial infarction, where a clot is blocking necessary blood flow. They are proteins, produced by recombinant DNA technologies, or extracted from bacterial or human cell cultures.

Most cause the proenzyme, plasminogen, presented in plasma, to the active enzyme plasmin. Plasmin then dissolves fibrin and inactivates other proteins involved in coagulation, principally fibrinogen. The main tbrombolytics used in clinical practice are urokinase, streptokinase, or one of several forms of tissue plasminogen activator (TPA). The TPA variants include alteplase, Reteplase, and tenecteplase.

While thrombolysis can be extremely effective, truly modifying and reversing the disease process, they are absolutely contraindicated in an actively bleeding patient, and have relative contraindications in patients at high risk of hemorrhage. Indications for thrombolyis include:

In stroke, for example, it is utterly essential that the cause is confirmed to be ischemia rather than hemorrhage. Making this distinction often requires cerebral angiography.

Synthetic FVIII and FIX are available, and can be used for prophylaxis and treatment of acute hemorrhage. Other drugs can counter the inhibition in acquired hemophilia, or help accelerate coagulation in acute hemorrhage.