Childbirth, or labor and delivery, is the process by which a woman gives birth to a baby. Standard Western practice divides the process into three named stages. The first stage of labor involves cervical dilation and has two phases: latent and active. The second stage of labor is the period from the descent of the baby to its actual birth, while the third stage of childbirth is when the placenta is delivered.

Childbirth is often accompanied by severe pain and attendant anxiety. The woman in labor generally experiences a wide range of complex and intense emotions

Ideally, the person performing the delivery -- a physician or midwife -- has access to prenatal sonograms, laboratory tests, etc. In any event, an experienced operator will palpate the uterus to find the position of the fetus. Vaginal examination will reveal potentially catastrophic complications such as placenta previa.

Knowledge of prenatal care, or the lack thereof, will alert the delivery team to potential complications of pregnancy and birth. Information from medical care warns of conditions including pre-eclampsia, gestational diabetes, herpes and HIV infection, hypothyroidism, erythroblastosis fetalis and tuberculosis.

A variety of factors go into the decision to induce vaginal delivery or to perform caesarian section.

When the gestational age is less than 36 weeks, the infant is likely to need neonatal intensive care (NICU), and, unless the baby is crowning or in a very low station, it is better to transfer the mother to a place with an NICU than to deliver the baby and transport it. At least consultation with an obstetrician is wise in the premature birth scenario. [1]

In uncomplicated deliveries, there are a wide range of options about the birth experience. It may be in the home, it may be in a minimally clinical "birthing center", or it may be in a fully equipped labor and delivery suite.

Some mothers prefer "natural childbirth" with no drugs for pain control, routine intravenous lines, or fetal monitoring. Others want more medical support. Pain control is complex, because a number of drugs that make the mother more comfortable also depress the respiration of the baby or the muscular tone needed for delivery. 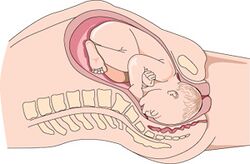 (PD) Drawing: U.S. Department of Health and Human Services
Most babies enter the birth canal facing sideways and the head turns face down.

The cervix shortens in preparation for birth. The normal uneffaced average cervical length is between 3.5 to 4.0 centimeters.

If a birth is premature or there are medical reasons to delay vaginal delivery, tocolytic drugs may be used to suppress uterine contractions. Current agents used to delay premature uterine activity include magnesium sulfate, oxytocin antagonists, calcium channel inhibitors, and adrenergic beta-agonists. Ethyl alcohol is obsolete for tocolysis.

The cervix is fully dilated and the woman begins to push to deliver the baby. This phase of labor can last many hours, although the condition of the mother and baby, not an arbitrary time, determines if surgical intervention is needed. [2]

In non-Western cultures, the baby is often delivered in a different position than the supine, feet-in-stirrups used in Western delivery rooms. A Cochrane review suggesed that kneeling or standing may be more comfortable for a mother, as long as epidural anesthesia is not used. The risk of bleeding, however may be lessened in the supine position. [3]

The baby is delivered at the end of the second stage of labor. The umbilical cord is cut by the doctor once the delivery is finished.

(PD) Drawing: U.S. Department of Health and Human Services
The head emerging from the birth canal.

The experience of pain varies with the emotional of the mother as well as the physical realities. It is an intensely emotional experience, and emotions have much to do with pain tolerance. Nonpharmacologic measures are always preferable for controlling discomfort, such as encouragement from one (or sometimes more) people there purely to support the mother, such as the father or a labor assistant called a doula.

Epidural anesthesia is one means of controlling pain, which also has minimal effect on the baby's respiration. It usually requires a second medical professional to administer.

A small incision, or cut, used to enlarge the vaginal opening. The person performing the delivery sutures the area once the delivery is finished. This is not always done during a vaginal delivery, and, indeed, is quite controversial.[4] One of the risks is inducing perineal and anorectal damage. [5] In a study of 258 episiotomies," of whom 98 (41%) had mediolateral episiotomies. Of these, 58 were delivered by physicians and 40 by midwives. The investigators found that episiotomies cut by doctors were longer and deeper than those cut by midwives. Only 22% of episiotomies cut by doctors were truly mediolateral (between 40 and 60°), and none of the episiotomies cut by midwives met these criteria." The angle of the episiotomy may be a risk factor for anal damage. [6]

The placenta is delivered during the third stage of labor. Usually this phase of labor takes between 5 to 20 minutes.