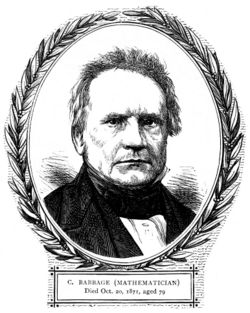 Charles Babbage (1791-1871) was an English inventor who taught mathematics at Cambridge University. He is important in the history of computing for having invented a viable mechanical computer equivalent to modern digital computers.

Babbage' first computer, called the Difference Engine, was a special purpose calculator designed, but only partially built, in the early 1800's for the purpose of computing naval navigation charts. His second computer, also never quite finished, was called the Analytical Engine. It was general-purpose, calculated based on the binary system, and used punched cards as input. It was especially novel for being able to branch on result of previous instruction. Issues preventing full realization of both projects were a lack of accuracy in the technology for machine parts and their great financial costs.

Recognition of his early importance for computing came only long after Babbage's death, in the mid-twentieth century when the electronic computer was invented[1]. A record of Babbage's efforts was made in 1842 by Italian writer Luigi Federico Menabrea, who described the Analytical Engine's mathematical principles in a paper. Fortunately, this article was translated into English the same year by Ada, Countess of Lovelace, an enthusiatic amateur mathematician and daughter of the poet Lord Byron. Ada's translated article, including her own extensive notes about her understanding of the significance of Babbage's work, became an important point of advocacy regarding Babbage's accomplishments[2].